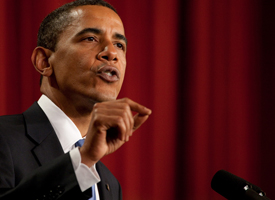 Here's the latest news on the stimulus:

This morning, the Obama administration announced "an accelerated pace of federal stimulus spending" this summer. The administration anticipates the increase will up the number of jobs created by the stimulus to 600,000. The plans include creating 125,000 summer jobs for teenagers and beginning work on national parks projects and Superfund cleanups. Counting jobs saved by the stimulus is extremely difficult, according to another AP article out today.

All eyes -- and the law -- are watching South Carolina Gov. Mark Sanford. Recently, the state's Supreme Court ordered him to accept federal stimulus dollars and the governor is expected to file the federal application today.

Disadvantaged and troubled youths in Philadelphia are being encouraged to apply for one of 600 jobs created by the federal stimulus.

New Hampshire was one of the first states out of the gate when it came to spending stimulus dollars. Jon Greenberg of New Hampshire Public Radio reports that "much of that progress might be invisible to many residents." To date, only 62 jobs have been created through transportation projects in the state.

The weatherization debate continues. The New York Timesjumps in.

Whether stimulus funds should be used to "green" a city has riled up the city council in Wichita, Kan. Some council members want to replace lights in parking garages with LEDs. The vice mayor is vehemently opposed.