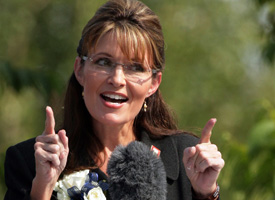 Lawmakers in Alaska are meeting today to override former Gov. Sarah Palin's veto of $28 million in stimulus dollars, Anchorage news station KTUU reports. At issue is a program run by the federal Department of Energy that offers states money to make buildings more energy efficient, upgrade street lighting and meet other goals. According to KTUU, Alaska is the only state not approved for the program; lawmakers have until Sept. 30 to apply for the money.

The stimulus may giveth in California, but budget cuts taketh away. The Sacramento Beereports on a strange situation in that city's old railyard, where stimulus money is paying to help move the train tracks as part of a redevelopment plan. At the same time, state budget cuts threaten to put the brakes on a housing project on the same site. The project is but one example of California's difficult economic situation, where $85 billion in incoming stimulus money is balanced against last week's $30 billion cut to the state budget.

State lawmakers are already worrying about what happens when the stimulus package is spent, reports Stateline.org's Stephen C. Fehr. A new survey suggests that the bulk of states used stimulus money to fill at least a fifth of their budget gaps, raising questions about how states will handle the winding-down of the stimulus two years from now. Fehr adds that Alabama, Kentucky, Washington and Wisconsin were able to avoid a fall in operating funds in fiscal 2009 — but those states are likely to face a drop in spending once the stimulus is over.

Joe Biden defended the stimulus package in an op-ed Sunday in the New York Times, arguing that the stimulus is ahead of schedule and that many projects are coming in under budget. Republican Sen. Mitch McConnell apparently wasn't convinced; speaking on CNN, McConnell said, "I think we can fairly, safely declare it a failure."

Do you feel like you, too, should be entitled to some stimulus money? A company called Grant Writers Institute is there to help you — or so it says. According to the Arizona Republic, the Federal Trade Commission says the company suggested that it could guarantee consumers a $25,000 stimulus grant from the government — and all people needed to do was purchase a $59 booklet on how to get their money. A judge has issued a restraining order against the company.

Are you tracking the stimulus? ProPublica has set up a mailing list for reporters covering the stimulus, and you're welcome to join. You can also help us by signing up for the Stimulus Spot Check, our latest ProPublica Reporting Network initiative.