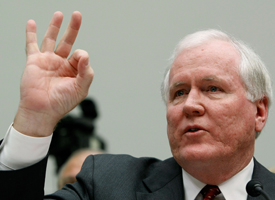 Testifying before a House Financial Services subcommittee, Liddy said all AIG's decisions have been made in conjunction with the Federal Reserve and agreed that Bernanke had signed off on the bonuses.

Subcommittee members expressed surprise at the acknowledgment. Rep. Paul E. Kanjorski (D-PA) in particular showed his frustration (PDF), referring to his efforts over a two-month period to work with AIG to address the bonus issue.

Kanjorski was clearly angered over Liddy's delay in convincing some executives to forgo the bonuses.

"Why couldn't this have been negotiated over the last two months?" he asked Liddy. "Do you realize the effect of this? It may have jeopardized our ability to get a majority of this Congress to support the release of further funds to avoid a meltdown," Kanjorski said.

The government's ongoing willingness to stand behind AIG's debts is critical to the health of the insurance companies, according to rating agencies AM Best and Standard & Poor's.

We wrote earlier that, without the government's backing, those companies are at risk of further rating downgrades, which could, in an extreme case, compromise the businesses.

AIG's insurance subsidiaries cover 38 million life and retirement policies for Americans, are the second-largest holders of municipal bonds, and insure 21,000 medical providers, according to company documents.

The outcry over bonuses re-emerged this week after AIG paid out $165 million. The top individual bonus was more than $6.4 million, and the top seven received more than $4 million each. The company has access to up to $180 billion in federal bailout funds.

Committee members requested that Liddy provide them with minutes from all meetings with the Federal Reserve Bank and the New York Fed, where the bonuses were discussed.

Liddy could not recall whether then-president of the New York Fed, Timothy Geithner, was present at earlier meetings about bonuses. Geithner's handling of the bonus issue, both before and after becoming treasury secretary, has also come under fire. Today, Rep. Connie Mack (R-FL) called for his resignation.