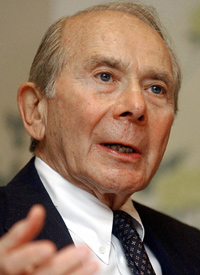 On the eve of his testimony before the House oversight committee, AIG has declared war on the company's former CEO, Maurice R. "Hank" Greenberg.

Greenberg is scheduled to be the sole witness at a hearing on the "collapse and rescue" of AIG, "and what it means for the U.S. economy," according to the panel's published agenda.

AIG launched a pre-emptive strike Wednesday, putting out a four-page dossier attacking Greenberg's credibility. The 83-year-old Greenberg was forced out in 2005 amid a scandal over securities fraud. The once-mighty insurance giant's departure into exotic credit derivatives began under Greenberg in the mid 1980s -- and culminated last fall when the AIG's bad bets came due and forced a taxpayer bailout.

"Given that Hank Greenberg led AIG into the credit default swap business, has repeatedly refused to testify under oath about a transaction he initiated when he was still AIG's CEO, and is being investigated by the SEC and the Justice Department, we don't understand how he can be viewed as having any credibility on any AIG issue," the company said in its statement.

Greenberg could not be reached Wednesday night. He recently has appeared on television talk shows, including the Charlie Rose show on March 17, and criticized both the government intervention and current management of AIG.

The company's titled its salvo: "The Greenberg Legacy." The first section includes 11 bullet points that recap history of the Financial Products division and Greenberg's role in originating it. Greenberg has tried to distance himself from the unit, which lost billions selling a form of insurance on toxic mortgage securities.

The next section deals with "Mr. Greenberg's Ouster." It recounts Greenberg's decision to "take the Fifth" when confronted by questions from investigators examining securities fraud by the company.

The campaign appears to be AIG's effort to seize the agenda after weeks of public outcry over payment of millions in retention bonuses to employees in the Financial Products unit who are trying to unwind the trades helped sink the company.

Greenberg remains a major AIG stockholder. He was forced to resign in 2005 after a series of scandals, including the prosecution of senior executives from AIG and the reinsurer, Gen Re, for fraudulent deals made to cook AIG's books. Greenberg has never been charged with a crime.

Democratic Rep. Edolphus Towns, D-N.Y., chairman of the House Oversight and Government Reform Committee, told the Reuters news agency that the hearing will delve into the Financial Products division's genesis.

"We want to take a very serious look and see if legislation is needed to prevent this from ever happening again," Towns told Reuters.

Greenberg was AIG's chief executive for 35 years. The government has committed up to $180 billion in taxpayer funds to rescue the firm, saying its collapse could cause widespread damage through the world financial community.