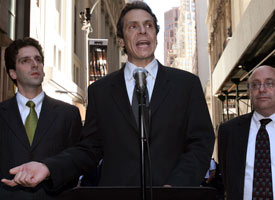 This morning, the government unveiled its latest move: upping the AIG bailout to $150 billion.

There were some strings attached, including a bailout first: The deal requires that AIG freeze its bonus pool for its top 70 executives. The terms don’t prevent bonuses for those executives, but they will see no increase in bonuses from prior years.

Why not eliminate bonuses for the struggling company altogether? "Senior Treasury officials" tell the New York Times that AIG might have lost too many execs that way. That explanation doesn't fly for some. âI donât think the job market is so great on Wall Street right now,â said Nell Minow, editor of Corporate Library, a corporate-governance research firm.

It's the first time that the Treasury or Fed has reached down past the very top echelon of executives to limit pay. The Treasury’s investments in the country’s banks, for instance, only come with limitations on the pay of the top five earning execs. But the new AIG bailout not only limits bonuses for the company’s top 70 execs, it also bars golden parachutes. (That’s not exactly reaching down to middle management. AIG has about 100,000 employees worldwide.)

The deal also has a couple of other bailout firsts: It seeks to limit AIG’s lobbying activity and corporate getaways. But it’s unclear what practical effect those measures will have. According to the deal’s terms (PDF), AIG is merely required to "maintain and implement its comprehensive written policy on lobbying."

The problem is that AIG doesn’t yet have such a policy. The company suspended its federal lobbying activity last month after outcry from Congress. But a comprehensive new lobbying policy is still being "finalized," said AIG spokesman Nick Ashooh.

The same goes for the company’s policy on corporate retreats and similar expenses. The company came to an agreement with New York Attorney General Andrew Cuomo after he threatened suit against the company if it continued paying out big bonuses to top execs. The agreement with N.Y. also put a stop to "all junkets or perks which are not strictly justified by legitimate business needs." But AIG is still finalizing its policy to be distributed to all employees, Ashooh said.