As wildfires continue sweeping the financial markets, analysts and legislators agree on the need to sift through the ashes of earlier blazes to learn what went wrong and how to prevent future disasters.

The U.S. Senate Committee on Banking, Housing and Urban Affairs had scheduled a hearing last week to discuss recent bank failures and the role regulators played in them. The hearing was postponed because of new developments in the financial crisis, but senators are expected to return to the topic. 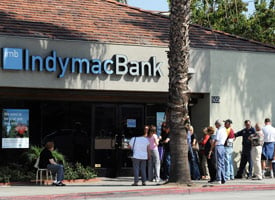 One major focus: the controversy surrounding one of the largest bank failures in the nation's history, the July collapse of Independent National Mortgage Corp., known as IndyMac.

One of the key witnesses senators want to hear from is John Reich, director of the Office of Thrift Supervision, which oversees the nation's savings and loan institutions. They are expected to ask him why OTS regulators didn't respond more forcefully to the obvious failings of Pasadena, Calif.-based IndyMac.

As he has in the past, Reich may well try to turn the blame back on a prominent member of the banking committee itself, Sen. Charles Schumer. In June, the New York Democrat sent a letter to the regulatory agencies -- which quickly found its way into the news media -- questioning IndyMac's solvency.

"All prospects of rescuing IndyMac disappeared after a June 26 letter to the OTS and the FDIC from Senator Charles Schumer that publicly expressed concerns about IndyMac's viability and caused depositors to withdraw approximately $1.3 billion from their accounts," Reich told a meeting of the American Bankers Association in Orlando in July.

While Schumer's famously ill-timed letter clearly hastened IndyMac's end, a detailed review of filings with the Securities and Exchange Commission and the Office of Thrift Supervision for December 2007 and March 2008 suggest that prospects for keeping the S&L afloat were all but nonexistent: The lender's demise was a matter of when, not if.

The filings raise the question of whether federal regulators felt it was more important to protect the bank's shareholders and executives than to safeguard the Federal Deposit Insurance Fund that would ultimately pay for the losses. The current cost of the IndyMac failure, according to the FDIC, is $8.9 billion -- a number that would undoubtedly have been smaller had the OTS called in the FDIC six months earlier.

"There are always questions when a bank fails," said William Ruberry, an OTS spokesman, who dismissed criticisms of OTS's actions as "Monday morning quarterbacking."

The IndyMac filings from early this year painted a truly dire picture. The S&L was heavily involved in issuing so-called Alternative-A (Alt-A) mortgages, one cut above the infamous subprime category. Defaults on the Alt-A category were high and climbing. The firm was losing money at a growing rate, and its stock price had plummeted.

A conservative strategy by the OTS would have been to downgrade the S&L, and thereby limit the risk to the FDIC fund that protects insured deposits. Instead, to buy time in the hope that a new business plan would improve IndyMac's earnings, regulators let the firm take modest write-downs of 5 percent or so in some of its troubled mortgage assets. This helped IndyMac keep its risk-based capital ratio barely above the 10 percent floor and allowed it to qualify as "well-capitalized," thus avoiding being added to the FDIC's list of problem institutions.

As a result, IndyMac was able to keep borrowing from the Federal Home Loan Bank and pulling in insured deposits. The insured deposits rose to $16 billion as of March 31, compared with $8.8 billion on June 30, 2007. The result: much greater exposure for the FDIC when IndyMac finally collapsed.

The OTS has assembled a chronology of its efforts to forestall IndyMac's collapse, according to spokesman Ruberry. Many of these actions were informal in that they involved the agency working in consultation with the firm. While Ruberry would not share the chronology before the hearing, the agency has put an IndyMac timeline with a list of some enforcement actions on its Web site.

By 2006, the company was one of the biggest purveyors of Alt-A single-family mortgages, which are generally offered to people with good credit scores but often with little or no verification of income.

As early as March 2007, news stories began mentioning the possibility of massive defaults of Alt-A loans, dubbed "stated income" or "liar" loans, because people who received them often couldn't demonstrate they could pay the interest on the loan, particularly if, after a period of time, the loan reset at a higher rate. In the first quarter of 2007, according to IndyMac's SEC filings, just 21 percent of the company's total loan production involved "full-doc" (fully documented) mortgages.

A June 2008 report by the Center for Responsible Lending, a foundation-funded nonprofit that reports on abusive financial practices, described an IndyMac corporate culture that emphasized loan volume and short-term growth over careful lending standards. (Among the center's funders is the family foundation of Herbert and Marion Sandler, the principal funders of ProPublica.) It's a characterization the company has disputed.

"It didn't have to happen this way," the report concluded. "Federal authorities -- including the Office of Thrift Supervision -- should have kept a closer eye on IndyMac's business model and practices."

The OTS's Ruberry said the agency disagrees with the center's conclusions. "The Center for Responsive Lending and any other external party doesn't have all the info on what happened," he said. "They can't substitute for the insight of examiners who are in the bank."

Ruberry also noted that the number of consumer complaints about IndyMac was relatively low.

In the fourth quarter of 2007, under OTS supervision, IndyMac moved $10.9 billion in troubled loans intended for sale to the secondary market to the category of "held for investment" -- a polite term for loans that would be very difficult to sell without a huge discount. By that time, those loans were starting to reset and the housing market to decline, with disastrous results that would continue into 2008.

In that portfolio of loans held for investment, 9.47 percent were nonperforming in March 2008, compared with 2.12 percent for the same period in 2007, according to the company's March 10 quarterly filing. To make matters worse, the company's loans were heavily concentrated in California and to a lesser extent Florida, both hit particularly hard by the collapsing housing market.

Yet in March 2008, IndyMac still wasn't on the FDIC's list of problem banks.

When IndyMac transferred the $10.9 billion to the "held for investment" category, it had to revalue the loans to reflect "market" value. The bank determined the value had dropped by only about $600 million, a little more than 5 percent. It also freely admitted in its financial filings that because of "the extreme disruption in the secondary market" it would be hard to sell the loans. Any significant further devaluation would have put IndyMac below the required risk-based capital ratios necessary to accept brokered deposits without an FDIC waiver -- deposits on which the bank had become heavily reliant. As IndyMac's primary regulator, OTS still had the power to downgrade the S&L and bring in the FDIC. Instead, the OTS -- optimistically, in retrospect -- approved another course for IndyMac.

In the fourth quarter of 2007, IndyMac changed its business model "in response to market conditions and OTS concerns," according to an agency fact sheet. Rather than continue to push the riskier and higher yielding Alt-A loans, it focused on originating mortgages it could sell to so-called GSEs, or government-sponsored enterprises, like Fannie Mae and Freddie Mac. The OTS hoped that would buy IndyMac enough time to "obtain a significant capital infusion or to find a buyer," according to the agency's narrative. Before that could happen, Schumer's letter appeared, and the bank didn't have enough liquidity to withstand the deposit run that followed.

The senator and his staff didn't respond to multiple calls from ProPublica asking him to explain how his letter to the OTS became public, or what he and his staff were thinking if they were responsible for leaking it. Could someone as financially savvy as Schumer fail to understand that a public airing of his views was almost certain, in the current environment, to drive IndyMac to if not over the brink?

Whatever role Schumer's actions may have played, OTS's actions reflected a brash if not heroic assumption that the economy would improve and IndyMac's fortunes would brighten. "The predictions of economists were that the market was going to turn around," Ruberry said. "We obviously know in hindsight, but we couldn't see into the future how sustained the downturn would be."

Given the bank's already precarious position in late 2007, those assumptions will likely be strongly challenged when senators turn their attention from crisis management to what went wrong.