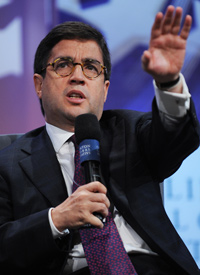 The Inter-American Development Bank, which has been making loans to Latin American and Caribbean countries for the past 50 years, has taken a $1.9 billion hit in its investment portfolio since the financial crisis began 18 months ago.

The IDB's chief financial officer, Edward Bartholomew, told ProPublica on Thursday that the losses have "not materially impacted our lending capacity." The bank issued $11.1 billion in loans in 2008.

Until now, the only public hint of the bank's losses was a brief mention in a September 2008 report posted on the bank's Web site showing a loss of slightly more than $1 billion during the first eight months of 2008.

But on Feb. 5, Sen. Richard Lugar, R-Ind., sent a letter to the head of the IDB, Luis Alberto Moreno, putting the losses at $1.9 billion. ProPublica has obtained a copy of the letter and it can be read here (PDF).

Lugar, the Republican leader on the Senate Foreign Relations Committee, called the losses "grave" and questioned how the IDB fell prey to the risky securities when other development banks, including the World Bank, International Monetary Fund and regional banks in Asia and Africa, avoided significant losses.

"Given the global financial crisis, one would expect most investors and banks to have lost money," Lugar wrote to Moreno. "However, the reported scale of the IDB's investment portfolio losses of $1.9 billion -- 10 to 100 times higher than the losses of the other development banks -- is of grave concern."

The IDB directs loans guaranteed by well-to-do nations around the globe to needy countries in the Western Hemisphere. It is owned by 48 countries, including 26 that receive loans and 22 that guarantee them.

As a 30 percent co-owner of the bank, the United States is on the hook for 30 percent of the bank's loans should they go south, so to speak. But bad loans aren't the bank's problem, because the debtor nations have a strong history of repaying their loans. Instead, the problem stems from the bank's investment activities in recent years. The bank maintains an investment portfolio of about $18 billion to ensure its solvency.

The IDB's investment in what now are commonly referred to as toxic assets topped out at 60 percent of the bank's portfolio in 2005 and remained above 50 percent as recently as 2007, according to a November 2008 study commissioned by the bank's Office of Review and Evaluation. Bartholomew would not discuss the report because the bank has not released it, but ProPublica obtained a copy and it can be read here (PDF).

Lugar summoned IDB officials to Capitol Hill this week to explain how the losses will affect the bank's ability to make loans, who will be held accountable for them, and what reforms the bank is making to ensure against future risky investing.

The IDB's affiliate, the Inter-American Investment Corporation, had loaded up on some of the dicey securities, but it unloaded most of them between 2001 and 2005, avoiding any significant losses.

Managing the IDB's portfolio is a small group of traders working out of a Wall Street-style trading room on the eighth floor of the bank's headquarters, a few blocks from the White House. In the past decade, those traders turned to the same risky asset-backed and mortgage-backed securities that generated the economic quicksand bedeviling much of the financial world today.

While the losses don't immediately threaten the IDB's solvency, they mean the bank will have $2 billion less to lend to developing countries in Latin America at a time when demands for loans are spiking due to tight credit markets and the recession. Also, the losses could affect the bank's AAA rating, which would increase the interest rates charged to developing nations receiving IDB loans.

The November study put the blame on the bank's leaders.

"Senior Management and the Board of Executive Directors have not been effective in executing 'top down' communication and oversight to the Management levels of the bank," the 22-page study (PDF) concluded.

It also noted that a 2005 report by the bank's Office of Auditor General raised concerns about the purchase of mortgage- and asset-backed securities and recommended the bank limit its investment in them.

"This finding remained outstanding from 2005 until the present day," according to the November report, which added, "It is highly unusual that an (auditor general) finding of this nature would go not only unaddressed but be presented to Senior Management as unaddressed on frequent occasions without comment or remedy."

The report says 90 percent of the assets accounting for the IDB's losses were bought in 2006 and 2007 -- after the auditor general's recommendation.

Bartholomew said the IDB is reviewing its investment policy and expects to make some changes. He couldn't predict how long that review will take, let alone when any changes might be implemented.

The Leader of New York’s “City of the Dead” Cashes In. Again.