As you probably know by now, this morning's Los Angeles Times reported that the government believes it has finally cornered the culprit in the 2001 anthrax attacks. The paper reported that prosecutors were "about to file criminal charges" against a former top government scientist, Bruce E. Ivins, before he died of an apparent suicide on Tuesday. 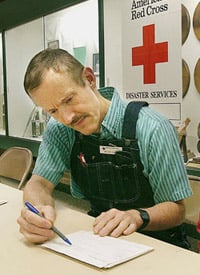 The FBI had been investigating Ivins since late 2006, the Times said, and began probing an incident shortly after the attacks in which Ivins didn't report loose spores in the Army bio-terrorism lab at Ft. Detrick. While the details are suggestive, Ivins' role in the 2001 anthrax scare remains an open question for some.

We assert his innocence in these killings, and would have established that at trial. The relentless pressure of accusation and innuendo takes its toll in different ways on different people, as has already been seen in this investigation. In Dr. Ivins' case, it led to his untimely death. We ask that the media respect the privacy of his family, and allow them to grieve.

Dr. W. Russell Byrne, Ivins' colleague of 15 years, made a similar claim to the Associated Press. "If he was about to be charged, no one who knew him well was aware of that, and I don't believe it," said Byrne.

His defenders point to the FBI's flimsy case against one-time "person of interest" Steven Hatfill. (That saga finally came to a conclusion last month after the Justice Department settled a lawsuit with Hatfill for nearly $6 million.)

As a recent investigation by the L.A. Times detailed, the FBI surveilled Hatfill 24/7 -- and continued to hound him even after the investigation came up empty:

Media coverage of the 24-hour surveillance helped cement Hatfill's public image as a central figure in the investigation. USA Today reported on May 29, 2003: "FBI officials believe they can't risk the embarrassment of losing track of Hatfill, even for a few hours, and then being confronted with more anthrax attacks." ...

Soon after Hatfill began drawing his paycheck [for a university job after he left Ft. Detrick], a Justice Department grants administrator ordered the university to terminate his contract.

Ashcroft and five FBI officials testified that they knew of no other instance in which the government had forced an investigative target out of a nongovernmental job.

Facing FBI scrutiny himself, Ivins was committed to a mental hospital in early June. The Frederick News-Post, the local paper where Ivins lived, reports that his psychiatrist there considered him "homicidal, sociopathic, and with clear intentions" around the time he was forced out of his job.

The FBI has so far not commented about Ivins. And it's now faced with a dilemma about whether to detail its case against an apparent suspect who will never get his day in court.  We’ll be following closely as more facts, hopefully, come to light.