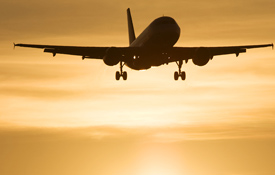 Some $1 billion in stimulus money for airports is all "out the door," Transportation Secretary Ray LaHood says in an interview with USA Today.  The newspaper, looking at the impact the money will have on airports' day-to-day operations, says LaHood  "acknowledged that 'there are a lot more needs in aviation' than the stimulus provided money for, and that spending for airports hasn't kept up with needs. 'We're making up for lost time,' he says."

The stimulus cost just went up. Someone recently spray-painted "$5 million Obama pork" on an American Recovery and Reinvestment Act sign at the Indianapolis Executive Airport in Zionsville, Ind. These signs, which the Associated Press  estimates cost roughly $500 to $1,200 apiece to design, make and install, are become a punching bag for critics of the stimulus.

In a Sunday op-ed placed in the Washington Post, President Barack Obama wrote: "The American Recovery and Reinvestment Act was not expected to restore the economy to full health on its own but to provide the boost necessary to stop the free fall. So far, it has done that. It was, from the start, a two-year program, and it will steadily save and create jobs as it ramps up over this summer and fall. We must let it work the way it's supposed to, with the understanding that in any recession, unemployment tends to recover more slowly than other measures of economic activity."  In sum the president asked Americans to be patient, and to wait for the stimulus to take full effect before losing confidence in the administration. In an interview with CNN aired on Sunday, Treasury Secretary Timothy Geithner said the stimulus would have its greatest impact in the next six months.  Obama's op-ed followed a Wall Street Journal story Saturday reporting that "the White House has been pressuring agencies to get some money out the door more quickly." To date, the administration has spent 12 percent of stimulus money. Ed DeSeve, a senior White House adviser, is quoted in the article as saying the administration has been on a "learning curve" with respect to the stimulus. To get the economists' take on this weekend's stimulus news, check out the Sunday roundup over at the blog Calculated RISK.

Republicans, the AP reports, "lined up Sunday in opposition to a second stimulus package, a rare demonstration of unity from an out-of-power political party in search of a rallying cry against President Barack Obama."

The Kansas City Star is running a poll asking whether we need a second stimulus, if you feel like casting a vote.