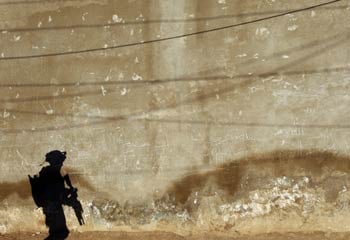 Yesterday, the Pentagon announced that the rate of soldiers committing suicides increased last year to the highest level in thirty years. As today’s New York Times reports, the number of suicides among soldiers has now increased for the fourth year in a row. Somewhere between 128 and 143 soldiers killed themselves in 2008. (Fifteen cases are still under investigation.)

Army officials in turn pointed yesterday to new programs and a campaign to combat the stigma of mental wounds.

"We need to move quickly to do everything we can to reverse the very disturbing number of suicides we have in the Army," Gen. Peter W. Chiarelli, who is responsible for suicide prevention, told the Times.

It’s a familiar refrain. Since 2003, yearly reports on the Army’s suicide rates have spurred similar news stories, and similar reactions by Pentagon officials. Suicide-prevention initiatives – such as the "battle-buddy" program, which relied on ordinary soldiers to keep an eye on each other – have spawned in the wake of the grim statistics, but the numbers have only worsened.

Officials have pointed to the added stress of the wars since a jump in 2003, but in the years since, suicides spread more evenly among reservists and soldiers who have never deployed. Financial, legal and family problems were among the likely causes, officials told the Times.

The deaths were about evenly divided among soldiers on deployment, those returned from deployments, and their comrades who had never deployed, according to the report.

The suicides also struck all levels of the military, from enlisted men overseas to young cadets at the Army’s elite West Point academy, the Washington Post reported today. Two cadets committed suicide, and another two tried to, within the last couple of months.

Though these were the first suicides at the academy since 2005, there’s no evidence that the deaths were linked to the Army’s larger problem. Officials at West Point told the Post, "nothing is more stressful here than it has been [in the past]."

The Army pledged a "stand down" day in which officers would be instructed to take time to address the problem in their units. They’ve also hired 250 more mental health specialists in the last year.

"[It] is absolutely critical is to reach out to soldiers and tell them it is not wrong to reach out for help," Chiarelli told the Times. "We have to change our culture."

The call for a change in culture also has echoes.

A March 2008 report by the Army’s inspector general suggested a new "culture of support for psychological health."

And in April 2005, the Marine Corps Times reported that the Army’s surgeon general, Lt. Gen. Kevin Kiley, told a House Appropriations subcommittee, "That’s still part of our culture: Real men don’t see [mental health counselors]… I would like to see a culture that resets the force mentally."