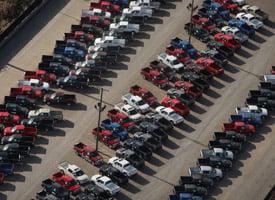 It turns out, nationalizing an auto industry is a complicated thing. Among the controversies that arose when the House voted yesterday to pump $14 billion into the flailing industry are questions over who gets paid off first if the car companies go belly up.

The Wall Street Journal reports that banks and bankruptcy experts were all in a huff over a line in the Monday draft of the bill providing that the government gets its money "senior and prior to all obligations, liabilities, and debts of any such holding company or company that controls a majority stake in the eligible automobile manufacturer."

This might be a violation of the Fifth Amendment of the Constitution, which guarantees just compensation for taking private property, bankruptcy and constitutional law experts told the Journal:

"It really sounds like a clear violation of the taking clause in the Constitution, to put the government ahead of all the other lenders. To go this route is a treacherous path riddled with all sorts of constitutional issues," said Don Workman, head of the restructuring practice at the law firm of Baker Hostetler.

On the other hand, Congress might argue that the bailout is actually keeping the car companies out of bankruptcy, and if the taxpayers are ponying up, then they should get some guarantees.

The upshot, reports the Journal, is that the bill passed yesterday softened some of the language that would give the government first dibs in case of bankruptcy. But it didn't answer the question of who does get to be first in line. It's now up to the Senate to take a crack at this thorny issue before it hits the courts.

Meanwhile, that's only one headache among many. Also at issue, notes the Journal, is whether the bailout will trigger billions of dollars of troublesome payoffs in the credit-default swaps market. And whether Congress is eroding years of tax reform efforts by putting its stamp of approval on a tax shelter that transit agencies have come to depend on. Not to mention questions over what, exactly, a car czar will do.