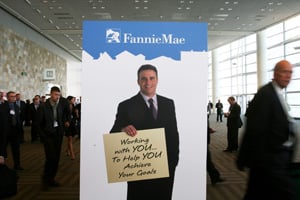 The Treasury Department will pump $15 billion more into Fannie Mae, the company announced last night. That brings Fannie's total bailout to $59.9 billion; together with its sibling Freddie Mac, the toll has risen to $110.6 billion. (Check out the totals in our frequently updated, frequently handy bailout database.)

Fannie lost $18.9 billion in the third quarter and $56.8 billion for the year so far. The company offered a couple of explanations for its continued downward spiral. First and foremost is simply the deterioration of the housing market: Fannie owns or guarantees nearly $3 trillion in mortgages, and borrowers continue to default in rising numbers. But Fannie also said its losses stem from its efforts, as an arm of the government, to modify mortgages for struggling borrowers.

Those costs will only go up in the future, since the government's foreclosure prevention program still hasn't resulted in many permanent modifications. Fannie expects to lose money through the program in a number of different ways. First, Fannie will take a loss when mortgages are modified to lower amounts. But Fannie will also be responsible for paying incentive fees (mostly to mortgage servicers) for completed modifications.

Where's all that money going to come from? Taxpayers. Each quarter, Fannie reports its losses and requests money to fill its operating deficit. That will continue, Fannie reports, and "we are dependent on the continued support of Treasury in order to continue operating our business." Its losses will continue into 2010, the company says. The only potential good news is that it expects its losses over 2010 to be less than those over 2009.

Fannie and Freddie’s bailout funds don’t come from the $700 billion TARP, but rather via a housing bill passed in July 2008. (We track both in our bailout database.) Treasury Secretary Tim Geithner has said that Fannie and Freddie could get as much as $200 billion each.

Both companies pay dividends on the money they've gotten from the government. But as we've pointed out before, because the companies are losing money, the only money they have to pay dividends is from, yes, taxpayers. In fact, Fannie reports that it's obligated to pay at least $6.1 billion in dividends over the next year, but that obligation "exceeds our reported annual net income for five of the past seven years and will contribute to increasingly negative cash flows in future periods if we continue to pay the dividends on a quarterly basis." Together, the two companies have paid $3 billion in dividends.

Fannie and Freddie were essentially nationalized in September 2008, but the administration has punted until next year on a permanent solution for the companies.