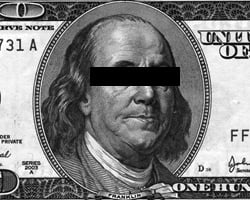 In October, we noted that the U.S. Treasury Department had blacked out key details of contracts it awarded as part of its $700 billion taxpayer-funded bailout plan.

Treasury officials said it would be only a matter of weeks before they shared the information.

Since it’s been a month, we got to wondering whether Treasury officials have followed through and removed the redactions. Turns out, they haven’t.

Treasury still won’t reveal how much it’s paying Bank of New York Mellon to keep the books for the government’s purchase of toxic securities. In the publicly released copy of the contract, compensation figures for the bank, described by the government as the "prime contractor," are just as blacked out as they were a month ago.

Asked when the information will be released, Treasury spokeswoman Jennifer Zuccarelli declined to provide a timeline.

Zuccarelli explained that the department does not want to reveal the financial terms of the three-year deal while other contracts related to the bailout are being negotiated. "We don't want to put ourselves at a competitive disadvantage," she said.

The department, for instance, is still looking to hire equity asset managers for the plan and accepted applications for the job until today. "We intend to make it public" once the asset managers are hired, Zuccarelli said.

But Zuccarelli conceded that the responsibility of an asset manager is remarkably different from that of Bank of New York Mellon, which will be the custodian of the bailout plan. So it remains unclear how the publication of one contract might affect the other. And the Treasury has released the terms of other contracts it has awarded as part of the plan.

The Treasury’s explanation "doesn’t hold water," said Steven Aftergood, director of the Project on Government Secrecy at the Federation of American Scientists.

"It’s disappointing that they failed to grasp the urgent public interest in the release of this information," he said.

Aftergood also warned that the Treasury’s withholding of contract details could set a precedent for future transparency (or lack thereof) in the bailout plan. "They’re just testing what the system will tolerate," he said.

The government released the redacted Bank of New York Mellon contract one day after a Treasury Department official touted the bailout plan’s transparency.

"Consistent with Congress' intent, we are committed to transparency and oversight in all aspects of the program," said Neel Kashkari, the Treasury’s interim assistant secretary for financial stability.

Meanwhile, the Bank of New York Mellon is not the only contractor to have its compensation redacted. BailoutSleuth, a site created by Mavericks owner Mark Cuban, has been flagging more examples, including contracts with accounting giants Ernst & Young and PricewaterhouseCoopers. But unlike its handling of the Bank of New York Mellon contract, the Treasury Department announced that the first phase of the accounting contracts will be worth $492.006.95 and $191,469.27, respectively.