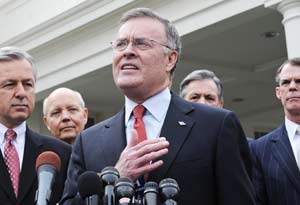 Torn between his duty to his shareholders and his country, Bank of America’s Ken Lewis chose his country. Or, really, he says, he didn’t have a choice.

Late last year, when it was becoming painfully apparent that Merrill Lynch would take billions more in losses, Lewis tried to back BoA out of the deal. The government –- Treasury Secretary Hank Paulson and Fed Chair Ben Bernanke in particular – forced his hand, he says. And not only did BoA have to go through with its acquisition of Merrill if he wanted to keep his job, Lewis says. He was also told to keep mum about the negotiations for more government assistance to back the deal, the Wall Street Journal reports.

But the story might not be so simple. Lewis says Paulson told him, "We do not want a public disclosure." New York Attorney General Andrew Cuomo’s office heard Lewis make that claim two months ago.   When Cuomo’s office then questioned Paulson about it, Paulson reportedly told them "that Mr. Lewis may have misinterpreted some remarks about the Treasury's disclosure obligations as referring to BofA's obligations."

So maybe it was all a mix-up?