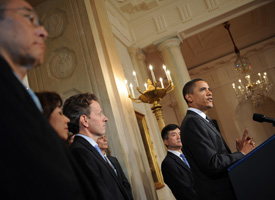 During yesterday's press conference on Chrysler's restructuring, President Obama struck a hopeful tone. Except when it came to "a group of investment firms and hedge funds" who, he said, had "decided to hold out for the prospect of an unjustified taxpayer-funded bailout." He was referring to a group of about 20 Chrysler lenders who had refused to accept the government's final offer to accept $2.25 billion in cash for $6.9 billion in loans.

To hear the lenders' side of the story, the U.S. is the bully here, able to push Chrysler's major lenders, the big U.S. banks on the bailout dole, to accept an unfair outcome. But the group, who reportedly have dubbed themselves the “Committee of Chrysler Non-Tarp Lenders,” say they won't be so easily intimidated. (A few nervous hedge funds, however, did flip after the president's public comments, allbeit too late to save Chrysler from bankruptcy.)

The group is betting that they'll do better in bankruptcy court. But the question is whether, in a refusal to accept the new reality, these Wall Street investors made an expensive political blunder as part of their bid to reclaim a few more pennies on the dollar. Legislators from Michigan say they're "vultures." The president scolded them at a press conference. And now "some industry executives" worry, the New York Timesreports, that the episode will provide further momentum to step up regulation of hedge funds.