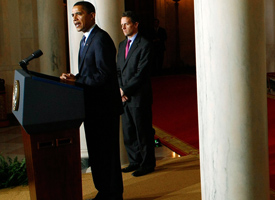 President Obama's administration still hasn't said just how it's going to use the second half of the $700 bailout bill, but today he rolled out his plan for limiting executive pay at companies that take federal money.

The bottom line: The restrictions are stricter than the Bush administration's, but provide plenty of wiggle room for execs to do well. There is no real limit on executive compensation, just restrictions on the type of compensation.

To give you a clear idea of how these limits stack up against the limits imposed by the Bush administration, we've broken down the differences in two charts below.

The restriction getting the most attention is the limit on executive pay. The struggling companies that have gotten bailout money -- a group that so far includes AIG, Bank of America, Citigroup (the auto companies have separate limits) -- get one set of stricter limits. The top five executives at those firms will be prohibited from receiving compensation in excess of $500,000... with a caveat. They can land more as long as the extra compensation is somehow dependent on long-term performance, such as stock awards or options that can only be cashed out after a certain period of time. Today's press release is vague in defining just how long that might be: either after the government gets all of its money back plus interest or until the bank seems relatively stable and on track to pay the government back. It's unclear who will decide that.

The new guidelines also require a vote by shareholders on the pay packages for the top execs -- but the vote would be a non-binding resolution, just a chance for shareholders to make their views known.

The restrictions on âhealthyâ banks will be even looser (and these aren't retroactive, only affecting a future round of investment in the nation's banks). There, the $500,000 limit isn't really a limit, but merely a disclosure requirement: Banks that want to pay their top five execs more will have to publicly disclose it. In that case, the shareholders would also have a chance to make their will known if the execs want more.

Here are the main guidelines for the struggling institutions compared to the ones used under the Bush administration:

And then there's the second group, the "healthy" banks. These limits will not apply to banks that have already gotten Treasury investments via the Capital Purchase Program or banks that get it through that program in the future. $250 billion was set aside for that program, it still has billions left, and more than 2,000 banks have applied, according to the GAO. Almost all of the 383 companies that have landed bailout money have gotten it through this program. These new limits will only apply to banks that participate in a second round of investments in "healthy" banks, if Treasury ultimately decides to do that: