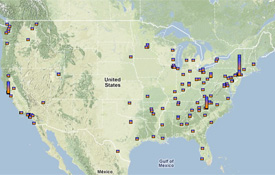 It's time for your weekly TARP update! Twenty-seven more banks announced this week that they'd received approval from the Treasury Department to get funds from the bailout bill. For the most part, they were relatively small regional banks with the exception of a handful of larger banks, the largest of which was Colonial Bank of Alabama, which will get $550 million.

That brings our total to $243.49 billion committed to a total of 149 financial institutions. The list has been growing steadily, but as you can see from our map, there's still a gap in the middle of the country.

So far not a single regional bank in Colorado, Nebraska, Arizona and New Mexico, among some other surrounding states, has signed up.

As always, you can see the list continue to grow here.