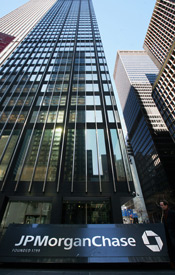 The list of banks joining the Obama administration's foreclosure relief program is growing -- and so is the cost.

So far, the Treasury Department has committed more than $13 billion to 11 loan servicers participating in Making Home Affordable, the administration's plan to modify mortgages for people on the verge of losing their homes. The servicers include some of the nation's largest banks, which have already received billions in government bailout bucks.

The program will eventually cost about $75 billion -- $50 billion in TARP money and $25 billion from Fannie Mae and Freddie Mac. Although it's optional for loan servicers to join the program, Treasury Secretary Tim Geithner has said that banks must participate to qualify for government assistance.

Leading the way is JPMorgan Chase, which is expected to eventually receive more than $3.5 billion. That figure is based on the number of Chase borrowers potentially applying for modifications.

Two servicers signed up yesterday, both owned by Bank of America: Countrywide received $1.9 billion and BoA's servicing arm got almost $800 million. And more are on the way. (Servicers have until the end of the year to join. For you loan mod junkies, our bailout site is tracking every servicer participating in the program and what the government is likely to pay them.)

Some of the payments are incentives for servicers to participate in the administration's plan. Servicers will receive $1,000 for each modification and up to $1,000 a year, for up to three years, as long as their borrower remains current on payments.

But let's be clear: The money isn't all going to the servicers -- they have to share much of it with lenders and borrowers too. Lenders who own the loans will receive $1,500 for each proactive modification -- those made while a borrower is still current on mortgage payments. Participating homeowners will get $1,000 knocked off their loan's principal each year for up to five years if they stay current.

The $13 billion committed so far is just an estimate of what Treasury will actually pay. Treasury has said that the estimates can go up or down, based on the number of modifications ultimately made.

One major question remains: When will the servicers be paid? Monthly? Yearly? Per modification? No one we spoke to -- including Kelly, of Chase, and a Treasury spokeswoman -- had an answer.