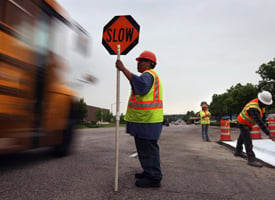 *It takes money to spend money, right? The federal government hired additional staff to oversee the stimulus, reports the Washington Post. Looking for such a job? They're not so easy to find, according to San Francisco Chronicle columnist Kathleen Pender.

* In response to complaints that a local company that won a stimulus contract didn't make a "‘good-faith effort' to hire enough minority subcontractors," the Colorado Department of Transportation just hired a coordinator to alert minority businesses to existing stimulus contracts.

*Yesterday we pointed out that cleanup of Kansas' lead-mining region could damage a road that's scheduled to be repaved with stimulus funding. According to Vice President Biden, the White House stepped in within an hour of learning of the problem and decided to clean first and pave later.

*While visiting Kansas yesterday, Biden also argued that the "benefit of stimulus spending extended to suppliers for construction work and even the restaurants that cater to road crews," reports the Kansas City Star. Hmmm... Restaurants catering to road crews? According to this Bloomberg News story, at least some construction workers in Rhode Island favor brown-bag lunches these days.

*When asked by NewScientist how funding long-term scientific research will jump-start our economy this year, the director of the U.S. National Science Foundation followed Biden's lead: "The graduate students and post docs that we will fund need to avail themselves of services, whether it's food, transportation or medical services." But what happens to all these researchers in 2012 when their grants run out? "The president has plans for a big increase in NSF funding in 2012," the director said.

*In an editorial, the Wall Street Journal notes that Education Secretary Arne Duncan announced this week that states without charter schools "will jeopardize their application" for additional federal stimulus grants.

*The USDA made public a list of 30 projects to promote the development of biofuels from wood that it is funding with stimulus dollars.