Earlier this month, the Coalition of Journalists for Open Government ran out of funding. But before it shuts its doors, the advocacy group has issued one final, scathing report (PDF) showing how a key tool for open government -- the Freedom of Information Act -- is losing its bite. 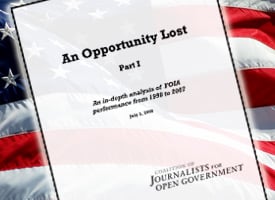 The report, "An Opportunity Lost,” (PDF) surveyed Freedom of Information Act processing across 25 departments and agencies from 1998 to 2007. The study found that while the backlog of unprocessed requests was down a bit from a year before, it was still at a near-record number.

The analysis, in its third year of publication following President Bush's Dec. 2005 executive order (PDF) calling for improved agency disclosure of information, comes less than a month after the Justice Department published its own FOIA study (PDF), which found that agencies made "remarkable improvements" in dealing with FOIA requests.

The advocacy group's study pointed to one potential reason for the continued backlog: The number of FOIA workers fell by eight percent.

"Clearly, some agencies do not have adequate funding to employ the number of FOIA officers needed," said Andy Alexander, Washington Bureau Chief at Cox Newspapers and one of the people who helped oversee the study.

The report also highlights an overall nine percentage point drop in requesters getting full or partial agency grants of FOIA requests, going from 69 percent in 1998 to 60 percent last year. Some of this could stem from a three-percent dip in spending since 1998.

"It tends to confirm with real data what most FOIA users will have suspected already from their own experience," said Steve Aftergood, the director for the Federation of American Scientists' Project on Government Secrecy. "That is that FOIA compliance is spotty and getting worse."

Pete Weitzel, the freedom of information coordinator for the now-defunct coalition group, said the analysis pulls numbers directly from other agency reports. (He added that the organization is closing due to a lack of funding.)

Justice Department spokeswoman Gina Talamona said reducing backlogs within the department remains a significant challenge: "The complexities of these requests, the number of offices that must be searched, the number of consultations that must be made, and the level of review that must be undertaken prior to responding to the request are all beyond the control of the agency."