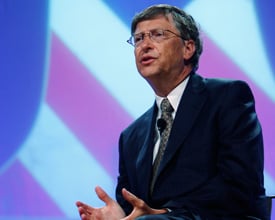 Bill Gates waded into the stimulus debate Tuesday, calling for states to be more ambitious in the way they spend stimulus money earmarked for public education. Speaking to the National Conference of State Legislatures in Philadelphia, Gates urged states to increase online learning, better assess both pupils and teachers, and create more schools modeled on charter schools, ThePhiladelphia Inquirer reports. "Our schools need to get better, or our economic positioning relative to others will get worse," said Gates.

In Watsonville, Calif., the Pajaro Valley Unified School District demonstrates how hard it may be for states to answer Gates' call to revolutionize education. The school district's trustees met to discuss how to spend $1.6 million in stimulus money, The Mercury News reports. In the meantime, the trustees need to decide how to cut $7.5 million from the district's budget for the coming year, on top of a $14 million cut in March.

The Missoulian's Steve Miller reports on stimulus gripes in Missoula, Mont., where a $600,000 construction project to build a roundabout has left local businesses complaining about lost revenue. The businesses say the construction project has made it harder for customers to reach their stores. "We're losing better than $1,000 a day on business," said the owner of Grizzly Grocery, while the owner of Cynthia's Fine Flowers said she's getting "hammered" with the loss of parking for her customers.

ProPublica Reporting Network member Rhi Bowman caught this story in the The Charlotte Observer, which reports that Mecklenburg County, the state's largest, has received $246 per person in federal stimulus dollars, compared with $328 per person statewide. Charlotte's mayor, Pat McCrory, criticized the way stimulus money is being spent, telling the Observer that the money should have been spent on "Eisenhower- and Roosevelt-type projects for the next generation." (You can follow the progress of stimulus spending in Charlotte through our continuing StimCities project.)

The White House defended the stimulus bill Tuesday night, the Detroit Free Press reports. Jared Bernstein, economic adviser to Vice President Joe Biden, told reporters that "an economy in free fall seems to be behind us," while Press Secretary Robert Gibbs said the stimulus was meant only to "cushion the blow" of the recession. The Free Press notes that the administration is sticking to its prediction that the stimulus will save or create 3 million jobs.