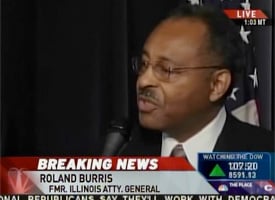 Blagojevich insisted his motivations for appointing Burris were pure.

"As governor, I am required to make this appointment," Blagojevich said while introducing Burris at a news conference in Chicago on Tuesday afternoon. "He will be a great United States senator."

"Please don't allow the allegations against me to taint this good and honest man," Blagojevich continued.

Burris, 71, declined to comment on the governorâs criminal case at the news conference other than to say, "You're innocent until proven guilty," and "I have no relationship with that situation."

Burris does, however, have a longstanding relationship with the governor.

He lost to Blagojevich in the 2002 gubernatorial Democratic primary and later served as vice chair of the governor's transition team.

The firm, meanwhile, has donated more than $10,000 to Blagojevich's campaign committee, Friends of Blagojevich. Burris also has personally donated $4,500 to the committee, including a $1,000 donation this June. By that time, it had been widely reported that Blagojevich was under federal investigation for accepting campaign contributions in exchange for official actions.

In addition to running his lobbying and law firms, Burris is senior counsel to the law firm of Gonzalez, Saggio and Harlan LLC. That firm's Web site says Burris serves on the board of directors of the Inland Real Estate Corp., a nearly $2 billion real estate investment trust that owns retail shopping centers mostly in the Midwest.

Lately, Burris seems to have been lobbying hardest for himself. Even after Blagojevich's arrest, Burris sought to win the governor's support for the appointment, the Chicago Tribunereported Tuesday. "With my knowledge and experience of Illinois and the U.S. Senate -- I know a third of the senators currently serving -- I would go in there hitting the ground running with an agenda for Illinois and an agenda the president-elect wants to carry out across America," Burris said earlier this month.

At Tuesday's news conference, Burris said he is "proud of my accomplishments as a public servant." Blagojevich offered him the position on Sunday, he said.

Burris was the first African-American elected to statewide office in Illinois when he became the stateâs comptroller in 1979. He remained comptroller until 1991, when he began serving one term as state attorney general. He also was vice-chair of the Democratic National Committee from 1985 to 1989.

We left a message for Burris at his lobbying firmâs office and will post an update if we hear back.

Blagojevich's decision to appoint Burris defied congressional Democratic leaders who warned they would refuse to seat anyone appointed by the embattled governor. Senate Majority Leader Harry Reid (D-NV) released a statement Tuesday saying, "Under these circumstances, anyone appointed by Gov. Blagojevich cannot be an effective representative of the people of Illinois and, as we have said, will not be seated by the Democratic Caucus."

The day after Blagojevich's arrest, Reid sent the governor a letter, signed by all 50 members of the Democratic caucus, warning him to "step down as Governor of Illinois and under no circumstance make an appointment to fill the vacant Illinois Senate seat."

Even Blagojevich's attorney, Ed Genson, said earlier this month that the governor wouldn't make the pick. "Harry Reid said that they're not going to accept anybody he picks," Genson said. "Why would he do that?"

Blagojevich said Tuesday that he has "no doubt" the Senate will seat Burris. And some legal experts doubt whether Congress has the legal authority to block a qualified appointee.

Obama, however, backed Reid. While on vacation in Hawaii, the president-elect issued a statement saying, "Roland Burris is a good man and a fine public servant, but the Senate Democrats made it clear weeks ago that they cannot accept an appointment made by a governor who is accused of selling this very Senate seat. I agree with their decision, and it is extremely disappointing that Governor Blagojevich has chosen to ignore it."

Illinois Secretary of State Jesse White also said he'll reject any paperwork that Blagojevich files to name a new U.S. senator. The secretary of state certifies official state actions. "Although I have respect for former Attorney General Roland Burris, because of the current cloud of controversy surrounding the governor, I cannot accept the document," White said in a statement.

But White aides admitted Tuesday that his threat is symbolic and is unlikely to have any practical impact on Blagojevich's appointment.

Blagojevich was charged on Dec. 9 with conspiracy to commit mail and wire fraud and solicitation of bribery. He has denied any wrongdoing and insisted he "will be vindicated."