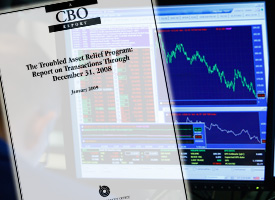 In a report today, the Congressional Budget Office tried to put a price tag on the bailout (PDF) through the end of last year. The answer: $64 billion.

Of course, since then, the Treasury has continued to dole out billions, so this report doesn't account for most of the loans to the auto companies or the billions more invested in Bank of America.

The report doesn't break down the cost to the government of every investment in every firm but does give an idea of where the major liabilities lie. The Capital Purchase Program, the Treasury Department's program to invest in "healthy" banks, has an estimated subsidy of $32 billion dollars; that's 18 percent of the $178 billion invested as of Dec. 31. AIG's estimated subsidy is $21 billion, 53 percent of $40 billion invested.

The bailout bill mandated that the CBO perform an estimate like this twice yearly, so the next report will give a more complete idea of how far the government is really in the hole.