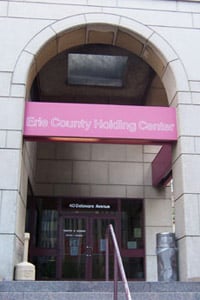 The U.S. Justice Department has settled a long-running dispute with a jail in Buffalo, N.Y., over whether the facility's failure to prevent inmate suicides violated federal civil rights law.

Under the agreement announced Friday, administrators of the Erie County Holding Center admitted no constitutional violations, but pledged to implement a host of reforms and physical improvements under the oversight of a court monitor. The agreement will become final if a federal judge approves it.

Justice Department officials and the Erie County Sheriff’s Office did not return calls from ProPublica about the settlement. U. S. Attorney William J. Hochul Jr. told The Buffalo News that the agreement represented a major step forward. “There is just a whole host of things that the county has committed to begin doing as soon as the judge signs the agreement,” Hochul said.

The settlement follows a two-year standoff in which the Justice Department’s Civil Rights Division demanded that Erie County improve jail conditions and county officials insisted they were meeting federal and state safety standards.

Detainees at the 680-bed jail kill themselves at a rate five times the national average. There have been eight suicides there since 2005, including three after the Justice Department filed a lawsuit last September accusing jail overseers of not doing enough to prevent inmates from harming themselves.

Earlier this year, we wrote about how smaller jails like the Erie County Holding Center have struggled to meet minimum standards established by federal law, while larger facilities have made substantial strides in lowering inmate suicide rates.

Under the agreement, Erie County officials will improve suicide screening and assessment, provide training in suicide prevention and detoxification to jail staffers, and improve medical record-keeping. They also have promised to make physical upgrades to prevent inmates from hanging themselves, such as installing Plexiglas over cell bars and replacing certain types of air conditioner vents.

The settlement does not cover all claims made in the Justice Department lawsuit. The government and the county are still on course to litigate allegations that the jail provides inadequate health care and that guards have used excessive force and engaged in sexual misconduct.