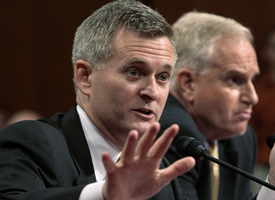 On his first day in office, President Obama ordered the government to ignore any legal opinion produced by the Bush Justice Department having to do with interrogations. It turns out that in its waning days the Bush administration itself repudiated many of the counterterrorism-related opinions its lawyers issued shortly after September 2001.

Yesterday's release of seven memos generated in 2001 and 2002 by the Bush Office of Legal Counsel -- the DOJ office that essentially determines binding law for the executive branch -- cleared up some mysteries about the legal thinking behind counterterrorism policies including harsh interrogation, extraordinary rendition and warrantless surveillance. For the most part the memos' existence, if not their contents, had previously been known. (We know that some 35 other memos remain secret.) But the memos of repudiation released at the same time were remarkable for their fresh revelation and also for their forcefulness.

The reasoning in 10 opinions that said the president had unchecked power to detain, interrogate and prosecute terrorism suspects, ignore the Foreign Intelligence Surveillance Act, suspend international treaties and flout the Fourth Amendment in domestic military activities "should not be treated as authoritative for any purpose," wrote Steven Bradbury, Bush's acting OLC chief in his second term, in internal memos on Oct. 6, 2008 (PDF) and Jan. 15, 2009 (PDF).

Bradbury called the analyses "not sustainable," "doubtful," "not supported by convincing reasoning," "highly questionable," "not satisfactory," "unpersuasive," and/or simply "incorrect."

OLC lawyers are considered to be among the nation's best educated and smartest. Two authors of the denounced memos are John Yoo, a professor at U.C. Berkeley's law school, and Jay Bybee, now a judge on the U.S. Court of Appeals for the Ninth Circuit. Both had been criticized in the past for generating legal advice that stretched the limits of interrogation.

A third lawyer whose work Bradbury repudiated was Patrick Philbin, who is now a partner at the law firm Kirkland & Ellis LLP. His tenure with the Bush administration was perhaps most dramatically marked by his nighttime accompaniment of then-Deputy Attorney General James Comey to Attorney General John Ashcroft's hospital bed in 2004. They succeeded in heading off a White House attempt to obtain Ashcroft's reauthorization of a legally suspect domestic spying program.

Among early Bush OLC propositions deemed unacceptable by a later Bush OLC (and, in some instances, by the U.S. Supreme Court):

These sound like critiques that would make any lawyer cringe. But Bradbury wrote in a footnote to his Jan. 15 memo that neither repudiating document "is intended to suggest in any way that the attorneys involved in the preparation of the opinions in question did not satisfy all applicable standards of professional responsibility."

As Newsweekrecently reported, a long-standing internal Justice Department investigation into the professional conduct of Yoo, Bybee and Bradbury himself is progressing. Should Attorney General Eric Holder approve the report, any adverse findings could be referred to state bar associations for possible disciplinary action.

Bradbury noted the "extraordinary historical context" of the disavowed OLC opinions' creation. They were "issued in the wake of the atrocities of 9/11" and took on "novel and complex legal questions in a time of great danger and under extraordinary time pressure."