This story was co-published with the Colorado Springs Gazette.

A southern Colorado man under investigation for his handling of protected wild horses has admitted to state regulators that he shipped animals out of Colorado in violation of brand inspection laws, officials said.

Officials with the Colorado Department of Agriculture's Brand Inspection Division have turned the case involving Tom Davis over to the district attorney in Alamosa for prosecution.

"The brand laws are some of the oldest laws in the state. They are there to prevent livestock theft and we take them very seriously," Brand Commissioner Chris Whitney said.

Davis, 64, a livestock hauler and proponent of the horse meat industry who lives in La Jara, 15 miles southwest of Alamosa, has purchased more than 1,700 wild horses from the federal Bureau of Land Management since 2008 — roughly 70 percent of all horses sold by the agency.

Davis signed agreements with the BLM, which is charged with managing and protecting wild horses, promising not to sell any to slaughter.

As detailed in an investigation published by ProPublica in September, Davis has brand inspections documents for 765 horses, which say he shipped these animals to Texas towns near the Mexican border.

There is no information about disposition of the other horses he purchased from the BLM. In an interview this spring, Davis said he found the horses good homes, but declined to provide records showing what happened to them. Reached by phone at his home this week, he said again that he has lived up to his sale contracts with the BLM.

An estimated 37,000 wild horses, descended from escaped Spanish steeds and Indian ponies, as well as ranch strays, roam public lands in the West, where they have been protected by law for decades. Selling them for slaughter is illegal.

The ProPublica account caught the attention of the Colorado Department of Agriculture, which requires all livestock in Colorado to be inspected by the state when shipped over state lines to prevent livestock theft.

Whitney interviewed Davis at his house Nov. 6 and said Davis was "very candid" in acknowledging that he had illegally shipped horses out of the state without the required inspections. Whitney declined to give details of the conversation, but said it was enough for him to recommend prosecution.

"Sometimes we issue a ticket, but this is a serious violation," said Whitney.

Davis acknowledged he had spoken to Whitney, but said he was not aware he could face prosecution.

If convicted, penalties range from a small fine to prison time, depending on whether the violations, which records suggest span years and many truckloads of horses, are charged as one infraction or hundreds.

"That is up to the prosecuting attorney," Whitney said.

The district attorney could not be reached for comment.

Davis is also the subject of a federal investigation. The probe was opened in June by the BLM's law enforcement division, but is now being handled by the U.S. Department of Interior Office of Inspector General, according to Interior spokesman Blake Androff. Often the inspector general takes over cases in which there is a potential conflict or involvement by the agency.

"By law and in practice, the IG's office is independent from the Office of the Secretary," Androff said.

The inspector general's office did not respond to questions about the subject and scope of its inquiry.

Wild horse advocates welcomed the news of the potential prosecution, but said any investigation would be incomplete until it includes the actions of the Bureau of Land Management and its parent agency, the Department of Interior.

"Let's get real. There is no way the BLM could think someone was buying that many unadoptable horses for anything but slaughter," said Laura Leigh, director of the Nevada-based advocacy group Wild Horse Education. "The people who sold those horses are just as culpable. This is a breach of public trust and there needs to be some accountability." 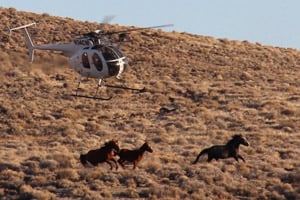 To keep the wild horse population on the range at target levels, the BLM rounds up thousands of horses each year and encourages the public to adopt them. Most horses, however, are not adopted and instead go into a government-funded system of feedlots and pastures that hold more than 47,000 animals — 10,000 more than are in the wild.

The system is at capacity and accounts for most of the BLM's wild horse budget.

BLM spokesman Tom Gorey described the agency as being "in a real bind."

Emails among BLM staff obtained through a Freedom of Information Act request show the BLM turned to Davis as a way to get horses out of government care. BLM employees would contact Davis, encouraging him to buy dozens of mustangs at a time, sight unseen.

Davis was vague in communications with the agency about his plans for the hundreds of untamed horses, according to BLM documents, saying he was going to use them as movie extras or sell them to graze on oil fields.

Davis is a vocal proponent of the horse slaughter industry and has tried to open his own plant.

"Hell, some of the finest meat you will ever eat is a fat yearling colt," he said in an interview in May. "What is wrong with taking all those BLM horses they got all fat and shiny and setting up a kill plant?"

The BLM did not attempt to verify his claims about where the horses went. When concerns were raised by horse advocates, the sale program director who approved Davis' purchases assured them that the buyer in question had a long relationship with the BLM and was "above reproach," according to an email Sandra Longley, one of the advocates who had misgivings about Davis, sent to other advocates.

In the past, the BLM has arrested wild horse buyers for attempting to ship horses to Texas to sell for slaughter.

In 2011, the agency arrested two Utah men, Robert Capson and Dennis Kunz, with a truckload of 64 wild horses bound for Texas, where, according to a federal indictment, they planned to sell the animals to an exporter for slaughter. The two were charged with wire fraud and making false statements, both felonies. Capson pleaded guilty this summer. Kunz is awaiting trial.

The North Carolina-based American Wild Horse Preservation Campaign is calling for a congressional oversight hearing on the BLM's management of the wild horse program.

"We are pleased the state of Colorado is acting immediately to hold Davis accountable," said Suzanne Roy, the group's director. "But what about the BLM? They need to be held accountable too."

Update, Nov. 13, 2012:  As reported first by Politico, Interior Secretary Ken Salazar threatened to “punch out” reporter Dave Philipps when Philipps asked him questions about the wild horse program and Tom Davis at an Election Day event.  The Colorado Springs Gazette has posted audio of the incident on its web site. In a statement issued today, a spokesman for the Interior Department said “the secretary regrets the exchange.”

Update, May 9, 2013: Last week, after months of false starts, Colorado authorities opened a formal criminal investigation into Tom Davis, a southern Colorado wild horse buyer who admitted to breaking state laws while shipping hundreds of federally protected wild horses to an unknown fate out of state. The Conejos County Sheriff's Office will handle the probe.