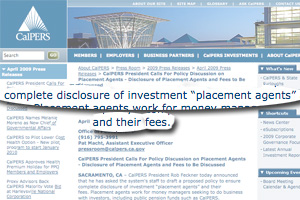 Last week, we reported with the Los Angeles Times that a key player indicted in New York state’s pension scandal had been active in California pension funds. Now, California’s biggest fund is acting.

Though a mainstay in the investment world, placement agents have become controversial thanks to the ongoing “pay-to-play” investigation in New York, where Hank Morris, a placement agent and onetime political adviser to former state Comptroller Alan G. Hevesi, has been charged with bribery and fraud.

A California placement firm, Wetherly Capital Group, received $313,750 in fees from Morris and another a firm he worked with in New York. Wetherly also shared fees with Morris for deals at CalPERS, the California teachers’ pension fund and Los Angeles Fire and Police Pensions, we reported last week.

Wetherly said there has been no suggestion of criminal or improper conduct on the firm’s behalf and that it is cooperating with investigators in New York.

The president of CalPERS board, Rob Feckner, said Monday that he has asked for a new policy on disclosure of fees paid to placement agents by investment firms that get business with the fund. Agents are typically paid 1 percent to 2 percent of the total amount secured in a placement.

CalPERS currently does not have any policy regarding the use of middlemen, which sets it apart from public funds in states such as Illinois and New York, which last week banned placement agents.

“Recently an issue of possible improper influence was revealed,” CalPERS said in a news release.

“Actually, it was the media reports in ProPublica and elsewhere about the issues relating to placement agents and the disclosures about New York,” CalPERS spokeswoman Pat Macht told us.

As yet, there are no details on what the policy would be or how it would be enforced. The issue will be discussed at the May 11 meeting of the CalPERS investment committee, Macht said.