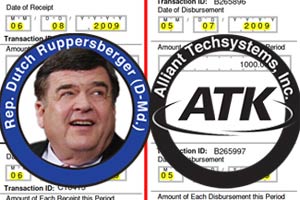 In January, the United States Supreme Court overturned limits on corporate election spending (PDF) in the Citizens United case, basing its decision, in part, on the assertion that campaign finance records are more open and accessible than ever before.

"With the advent of the Internet, disclosure of expenditures can provide shareholders and citizens with the information needed to hold corporations and elected officials accountable for their positions and supporters," Justice Anthony Kennedy wrote in the court’s majority opinion.

ProPublica decided to test this premise as we pored over campaign contribution filings to tell the story, co-published on April 16 in the Washington Post, of 16 lawmakers who held fundraisers at two Bruce Springsteen concerts last year, many of them in sky boxes rented from companies and special interests. We wanted to know if the records the court had referenced could show us who was getting face time with lawmakers at these pricey events, information that’s key to determining whether special access was influencing legislative decisions.

While we found many records online, none of them clearly indentified those who attended the fundraisers or how much money was raised. At best, we ended up with a handful of possible attendees. At worst, we were left with no clues at all.

The Federal Election Commission requires politicians to disclose the dates and amounts of contributions they receive in periodic reports. Corporate and special interest political action committees (PACs) are also required to file reports with the FEC, disclosing the money they contribute. "In a perfect world, they match up," FEC spokesperson Mary Brandenberger told ProPublica.

But when we compared those records for the Springsteen fundraisers, two problems emerged. Most of the dates the politicians said they got the money differed significantly from the dates the PACs said they disbursed their contributions. And many of the expenditures the lawmakers disclosed in their reports were so vaguely described that they were almost meaningless.

We began our search with an advantage, because some invitations to the Springsteen fundraisers were leaked to the nonprofit Sunlight Foundation’s Party Time website. Sunlight’s list represents only a small fraction of the fundraisers held in Washington each year, so there may have been more fundraisers at Springsteen concerts – there’s simply no way of knowing for sure.

With the invitations in hand, we began plowing through the records, but in no time at all, something seemed odd: the lawmakers reported surprisingly few contributions on the dates of the concerts —May 18and Nov. 2, 2009. Even expanding our search to include contributions made near the dates of the fundraisers yielded few additional matches.

Without knowing the true date of a contribution, it was impossible to determine whether a donor had bought a ticket to the event or if a contribution had been made during a period when the donor had a monetary interest in legislation before Congress.

Rep. Dutch Ruppersberger, D-Md., who hosted a May 18 fundraiser in a box rented from aerospace contractor ATK, declared in FEC filings that he received 15 individual contributions on May 4, all from employees of defense contractor Northrop Grumman. He received eight more contributions on June 15, including several from lobbyists with the Carmen Group. However, none of the 23 donations were for the $1,500 Ruppersberger was asking for a ticket to the event, suggesting they may not have been relevant.

Ruppersberger reported receiving several contributions from PACs on or near the concert date. Two, for $1,000 and $5,000, came from aerospace contractor ATK, which also rented Ruppersberger a box for the event. ATK’s corporate PAC told the FEC it disbursed the donations on May 7, 2009 – a week and a half before the concert. However, Ruppersberger’s campaign committee said he got the checks more than a month later, on June 8.

Ruppersberger’s campaign press secretary, Heather Molino, did not explain the discrepancy. Instead she told ProPublica in an e-mail, "we follow FEC regulations and report the date campaign contributions (checks) come into our possession. We can’t speculate what happens to checks before we get them."

To gauge whether the gap between Ruppersberger’s and ATK’s filings was an outlier or a common occurrence, ProPublica reviewed the dates of 825 PAC contributions the 16 lawmakers reported receiving during filing periods that covered the dates of the concerts. After comparing the dates the lawmakers reported receiving the donations with the dates with the PACs reported disbursing them, we found an average gap of 13.6 days. In 81 instances, the gap was a month or more.

Several of the lawmakers suggested the gaps might be due to PACs listing disbursements before they actually made.

Jen Gilbreath, Rep. Peter Defazio’s campaign manager, said the International Brotherhood of Electrical Workers PAC reported disbursing a contribution on Apr. 23, 2009, but then sent it to the local union branch, which mailed it to DeFazio’s committee on May 26. She said it arrived on May 29, 2009, which is the date that DeFazio’s committee reported receiving it.

We also found it was usually impossible to connect the expenses the lawmakers itemized on their disclosure forms to the Springsteen fundraisers, or to any specific fundraiser for that matter. For example, the leadership PAC for Rep. Joseph Crowley, D-N.Y., rented a box for his May 18 Springsteen fundraiser from GE/NBC Universal – describing the expense as "PAC Fundraising Expense for FUndraiser [sic] at hall."

We were able to confirm that those payments – and similarly vague payments listed by other lawmakers – were for Springsteen boxes only through additional reporting that did not rely on the public records that Justice Kennedy described as "the information needed to hold corporations and elected officials accountable."