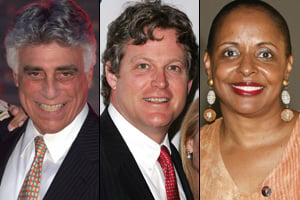 Looking for work? Lots of Americans are these days, and there's one line of business where you can earn millions of dollars simply by introducing clients to your high-powered friends.

Placement agents, for years, have been wrangling fees from the business of investing public funds. We're now learning how widespread and lucrative their business has been, and ProPublica wanted to know: How does one become a placement agent? It's not exactly a job that would pop up in an aptitude test.

We took a look at some of the people who have been tilling the soil at the funds in New York City, which seemed as good a place as any given the huge pension funds in town, to see what qualifications one needs to get into that line of work.

There's a former rising star of New York politics, the son of a renowned federal senator and the first lady of Bermuda.

None of these people has been accused of wrongdoing. In some cases, though, their investment expertise is questionable, and it's hard to put your finger on what their precise qualifications are.

But we think we might have narrowed it down. Here's our checklist of what one might do to become a placement agent. New York City is planning to ban placement agents, but of course, there are plenty of other locales to work.

It's all about connections.

If you want to be a placement agent, try to have well-connected parents. Yes, it's true, most of us don't get to choose our parents, but perhaps one could consider adopting a political power broker as a father or mother.

Sen. Kennedy chairs the Senate committee that oversees private -- not public -- pension funds in the U.S. Since neither of the Teds would talk to us, we don't know whether Ted Jr.'s firm does business with pension funds under his dad's jurisdiction.

If you can't arrange for influential parents, go for other powerful relatives. Wanda Henton -- a placement agent in New York City -- married Ewart Brown, now the premier of Bermuda.

If you really can't get the connections you need by birth or marriage, there is another route. Take Stein, for example.

He was once a rising star of Democratic politics in New York City. He was elected as a New York State assemblyman at 23 in 1969, Manhattan borough president in 1977 and City Council president in 1985. In 1993, he contemplated running for mayor but dropped out before the primary.

As City Council president, Stein was a trustee of the board of New York City's largest pension fund -- the New York City Employees' Retirement System, or NYCERS.

He also served on the City Board of Estimate, which was then responsible for budget and land-use decisions.

Sitting with him at meetings of both boards was William C. Thompson Jr., then deputy borough president of Brooklyn. Thompson is now the New York City comptroller -- the fellow with the most power to decide who gets business investing the city's funds. He's also the likely Democratic nominee for mayor this year, and has raised almost $160,000 from the finance sector since 2005, campaign finance records show.

Don't be shy about charging "finder's fees" -- even to your relatives.

When you have connections, don't be bashful about using them.

A 2004 court decision shows that Stein's brother, James A. Finkelstein, sued him for refusing to repay a decade-old $100,000 loan.

Andrew claimed that James had "agreed to waive enforcement" of the loan if Stein "located individuals who would invest an aggregate of $250,000 or more in [James'] business enterprise," according to the court's opinion.

That's just the kind of chutzpah a placement agent should show -- but it might not work every time.

The judge didn't buy Stein's argument, and said that, even if the brothers had agreed on the "finder's fee" arrangement, it would have been required to be in writing.

Don't worry too much about formal qualifications.

Formal, shmormal. Yes, we know that Andrew Cuomo, the New York State attorney general, says placement agents should all be registered as lobbyists or have a range of licenses with the Securities and Exchange Commission, but that hasn't stopped them in the past.

How so? Again, cue Andrew Stein.

In addition to running his own firm, Arapaho Partners, Stein worked for York Stockbrokers for three months in early 2007, according to his broker profile on the Web site of the Financial Industry Regulatory Authority. A list of placement agents released by Thompson, the comptroller, says York was the sole placement agent on a Lehman Brothers deal in 2007 for $230 million.

"That was probably Stein's deal, not ours," said Nick Walker, managing director at York. By the time the Lehman deal went through, Stein had already left York because he lacked the SEC licenses he needed to work as a placement agent for the firm, Walker said. Stein did not return our calls for comment.

"We required a certain level of registration," said Walker. "He didn't have the test, so any agreement we had with Lehman in the end was assigned to Arapaho."

The fact that York thought Stein lacked certification to do the deal didn't stop him. He simply left the firm and did the deal on his own.

Be prepared to spend time on the rubber pheasant circuit.

It's a hard life, but to succeed as a placement agent, you will have to endure many white tablecloth meals.

In 2002, Wanda Henton Brown and her husband enjoyed an intimate fund-raising luncheon arranged by their friend, Tina Byles Poitevien, in Washington, D.C. The guests paid $2,500 each and were described by Poitevien as having "close personal relationships with Dr. Brown or his wife, Wanda Henton Brown."

The guests also happened to be pension money managers. Poitevien would not say whether the managers conducted business with the Bermuda pension fund, according to the Philadelphia Daily News, which said Poitevien worked as an investment consultant for the funds.

Don't let the odd controversy stand in your way.

Even before the current conflagration, pension scandals erupted every few years, and once they subsided, things seemed to go back to normal.

The teachers' fund discovered that Kennedy's fees were nearly 2 percent of the $35 million it had planned to invest in the real estate company and refused to hand over the fee.

At the time, New York City was considering a deal with the same company, according to a document we've seen, but that deal was never completed.

Kennedy's firm went on to get more investments from other municipal funds, in Boston, for example, as soon as 2005.

And Wanda Henton Brown's friend -- the lunch organizer -- had also been at the center of an imbroglio in Philadelphia. Her firm won a contract to manage Philadelphia's pension fund investments even though fund staff recommended against her, according to news reports. Poitevien, who had been the chief investment officer at Philadelphia's funds, went on to win consulting contracts from the Bermuda pension funds -- close to her friends, the Henton Browns.

Thanks also to Wayne Barrett for his help preparing this report.