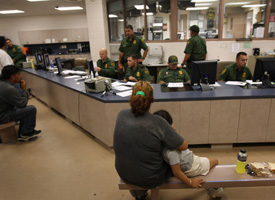 The Associated Press has today's must-read on the interplay of politics and stimulus spending. "Despite Obama's promises that the stimulus plan would be transparent and free of politics," the AP reports, "the government is handing out $720 million for border upgrades under a process that is both secretive and susceptible to political influence." Among the results: a checkpoint in Laredo, Texas, that gets more than 55,000 travelers a day was passed over for stimulus money, while a checkpoint in Westhope, N.D., that sees just 73 people a day is getting almost $15 million for renovations.

Hopes that the stimulus would fund education reform are being dashed, The Washington Post reports, as schools across the country use stimulus money simply to survive. The American Association of School Administrators released a survey (PDF) Tuesday on how school districts are using Recovery Act money. The takeaway? "A lack of flexibility in the funding and the use of the money to backfill federal, state and local budget holes have limited the ability of districts to implement innovative reforms and changes."

Good news: Slumping construction costs mean the government is spending an estimated 16 percent less on construction projects than expected, according to an analysis of 700 stimulus projects commissioned by USA Today. On those projects, the government has paid $620 million less than anticipated, and the savings are funding additional projects like new rail cars and enhanced airport security.

Bad news: The Social Security Administration said Tuesday that it mistakenly sent stimulus checks worth a total of $425,000 to 1,700 prison inmates. Official records "did not accurately reflect that they were in prison," an SSA spokesman told Fox News. Inmates typically aren't eligible for Social Security benefits, but, in a twist, some of the inmates -- those who weren't incarcerated between November 2008 and January 2009 -- did in fact get the $250 checks "fair and square," according to Fox News.