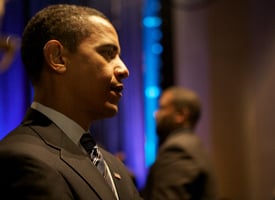 The incoming Obama administration has launched an “aggressive campaign” to release the second installment of bailout funds, the Washington Post reports. Given widespread criticism from both right and left over how the Bush administration has handled the first $350 billion, opposition is to be expected.

But the real uphill battle is for those opposing the bailout and not the Obama team. According to the $700 billion TARP bill passed in October, the president must request the release of the second half of the funds, which then triggers a 15-day window during which Congress must pass a resolution in order to block it. The vote needs a simple majority in the House and 50 votes in the Senate to pass. But even if that resolution passes, the president can still veto it. In order to override the veto, both houses would need a supermajority.

As a result, only near unanimous opposition in the Congress could effectively block the second $350 billion. And already, the New York Times reports, the winds seem to be blowing Obama’s way, with the Democratic congressional leadership and even a Senate Republican already indicating support.

But the vote could be close. (The Times, Post, and Wall Street Journal all say a vote could come as early as Thursday or Friday). House and Senate Republicans have both come out against releasing the money, and Democrats have been making skeptical noises. Senate Majority Leader Harry Reid’s (D-NV) spokesman tells the Post, "We're still unsure of where the votes are, but we're working hard on that right now.”

There seems to be a consensus that the Obama team needs to be more specific about how the funds will be used than they were in yesterday’s vague letter. “I'm persuadable to the extent that somebody's got a plan and an idea of how it's going to be administered,” Sen. Blanche Lincoln (D-AR) tells the Post.

But just how specific Obama’s team will get isn’t clear yet. Rep. Barney Frank (D-MA) has introduced legislation in the House that is long on specifics: It requires that at least $40 billion of the $350 billion be spent on foreclosure relief and institutions that get bailout money issue public quarterly reports on what they’ve done with it. House Speaker Nancy Pelosi (D-CA) has said that she’ll bring that bill to a vote this week, but Roll Call reports that the bill is unlikely to get a vote in the Senate and “could serve as a fig leaf for House Democrats nervous about a public backlash against Wall Street bailouts.”

We’ll keep you updated as the next chapter in the bailout plays out.