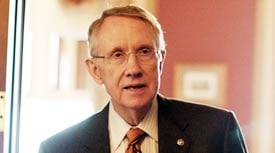 Democrats in both houses of Congress are preparing legislation to facilitate reversing some of the Bush administration’s last-minute controversial rules.  The rules range from easing regulations on coal mining practices to allowing health-care workers to refuse to administer abortions based on their personal moral objections. You can see our running tally of midnight regs here.

A list of the Senate’s top ten bills for 2009 leaked to the American Prospect shows that one bill will "return the Government to the people by reviewing controversial 'midnight regulations' issued in the waning days of the Bush Administration."

A congressional aide in Sen. Harry Reid’s (D-NV) office confirmed that this is indeed one of the top ten bills in the Senate agenda but did not provide further details.

It’s unclear how the bill differs from the Congressional Review Act, an obscure Clinton-era law that we pointed out previously. The Review Act was used once before to overturn a midnight regulation in 2001, and it allows Congress to vote to disapprove any rule finalized within about six months before Congress adjourns.

In a media announcement, Rep. Jerrold Nadler (D-NY), Chair of the Judiciary Subcommittee on the Constitution, Civil Rights and Civil Liberties, announced that he was reintroducing a bill in the House that goes a step further by allowing the Obama administration’s appointees to review any rule that was proposed, finalized, or had gone into effect after October 22 (for a detailed explanation of these terms visit our regulations tracker). Nadler first introduced the bill in November when the Bush administration’s midnight rulemaking was at its height.