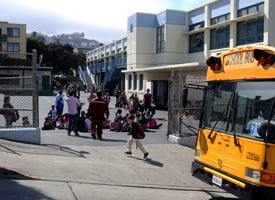 It's back-to-school time, and the kids aren't the only ones with the jitters. The New York Times reports that $100 billion in stimulus money for education hasn't been enough to prevent "the most extensive school layoffs in several decades" as school districts cope with falling tax revenue. Funding cuts have also led to salary cuts, larger class sizes and fewer support employees, including librarians, nurses, cooks and bus drivers.

The Wall Street Journal reports on the challenges facing businesses as they try to manage stimulus-fueled growth spurts. According to the Journal, companies are forced to balance between stretching their existing staffs too thin and expanding at a rate that can't be maintained once the stimulus money runs out two years from now. In the money quote, Mark Green, a consultant for family firms, says that, managed poorly, "growth is a great destructor of business."

The Houston Chronicle reports that Texas Gov. Rick Perry, an erstwhile opponent of the stimulus package, is now using stimulus funds to his political advantage. Of the $90 million in stimulus-funded crime grants headed for local law enforcement agencies in Texas, Perry's office determines how to distribute 60 percent, about $54 million. Perry has used similar law enforcement grants for political gain in the past, according to the Chronicle: In 2006, they "helped Perry win the endorsement of border sheriffs."