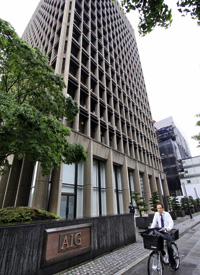 AIG has sold a dozen of its subsidiaries since April as part of its effort to repay the $85 billion it owes the American taxpayer.

That should be good news, right?

Well, actually, we don't know for sure, because the company is not disclosing what it got for nearly half the companies that have been sold.

AIG has made public the financial terms of seven of the transactions, including the sale of its iconic building in Tokyo for $1.2 billion and six insurance subsidiaries for a combined total of more $5 billion.

But for five other transactions, the company is keeping the numbers a secret.

AIG says there's no particular reason why it won't tell the public how much it is getting for the companies, which include consumer finance operations in Mexico and Argentina and a bank subsidiary in Russia.

"It's decided on a case-by-case basis," said spokeswoman Lauren Day. "It's a function of the preference of the buyer."

But financial analyst Sylvain Raynes thinks AIG has an obligation to be more open given that taxpayers own 80 percent of the company.

"There's nothing wrong with private transactions between consenting adults," said Raynes, founder of R&R Consulting, a firm that analyzes market risk. "But when the government is involved, everything changes."

The company needs to get good prices to improve its prospects of repaying the bailout, Raynes said. But the lack of transparency means the public cannot gauge whether that is happening.

"I'm sure they're not getting a good deal," he said. "If you buy from someone who's desperate, what do you think? That's probably why they're not talking about it."

It's possible the two government entities most directly involved with AIG -- the Treasury and the Federal Reserve -- know more about what the transactions were worth. But neither would say for sure.

The Fed referred us back to AIG, and a Treasury official did not directly answer our question, saying instead that the agency is monitoring the transactions and will keep the information confidential until "binding" sales are announced.