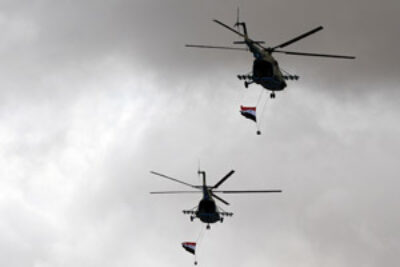 In late October, Syria asked Iraqi authorities to grant air access for a cargo plane transporting refurbished attack helicopters from Russia, according to flight records obtained by ProPublica. With Turkish and European airspace off limits to Syrian arms shipments, the regime of Bashar al-Assad needs Iraq’s air corridor to get the helicopters home, where the government is struggling to suppress an uprising.

Iraq regained control of its airspace from the U.S. military just a year ago and has been under intense diplomatic pressure from the United States to isolate the Syrian regime. Turkey says it has closed its airspace to Syrian flights, and if Iraq did so, Syria would be virtually cut off from transporting military equipment by plane. European Union sanctions have already constricted arms transport by sea and air.

But it is unclear whether Iraq permitted the fly-overs described in the documents. The Syrian cargo plane scheduled to pick up the helicopters did not land or take off from Moscow at the appointed times this month, suggesting that those flights did not happen.

Some of the flight request documents have been posted by hackers associated with the online collective Anonymous and formed the basis of a Time story Thursday. Other documents were obtained separately by ProPublica, which reported Monday that Syria appears to have flown 240 tons of bank notes from Moscow this summer. The authenticity of the documents in either cache could not be independently verified.

But taken together, the documents appear to contain new information. They show that Baghdad has requested several times to inspect other Syrian flights that were going to pass over Iraq from Iran and Russia, something that U.S. officials confirmed to ProPublica.

According to an overflight request form dated Oct. 30, the helicopter the Syrians were going to pick up is an Mi-25, a Russian-made gunship that experts liken to a cross between an Apache and a Black Hawk helicopter because it can fire from the air and transport troops.

“Mi-25s are very important to the Syrian Air Force effort against the rebels,” said Jeffrey White, former chief of the Middle East intelligence division for the Defense Intelligence Agency and now at the Washington Institute for Near East Policy. “It’s a heavily armored military helicopter, which makes it very difficult for the rebels to shoot down.”

Videoshave been posted online that appear to show Syrian Mi-25s attacking rebels, and Syria has reportedly been struggling to maintain the helicopters.

Still, the documents leave many questions unanswered. Crucially, it is not known whether the overflights actually happened.

A U.S. diplomatic official told ProPublica that the United States has been working with the Iraqi government to stop such flights. “We have urged them directly to insist that the inspection of those flights occur or deny overflight rights,” the official said. “We have raised this concern and they have taken a couple steps in the right direction — either denying overflight rights if they believe arms are being shipped to Syria or insisting on an inspection.”

But, State Department and Pentagon officials have not provided information on the particular request made in the documents. Iraqi and Russian officials did not respond to questions.

The first two flights were scheduled for Nov. 21 and Nov. 28, but a photographer hired by ProPublica did not observe the cargo plane at the Moscow airport where it was supposed to land and then take off just three hours later. Nor could the flights be confirmed with international tracking services that have recorded the plane’s movements in the past.

Two more flights are scheduled for Dec. 3 and Dec. 6 , according to the records.

The Assad regime has been trying to suppress a popular uprising for almost two years. Tens of thousands of people have reportedly died in the fighting. On Thursday, dispatches described intense clashes on the main road to the Damascus International Airport, and at least one airline was reported to have canceled flights. Most of the Internet in the country was shut down as well.

Russia’s prime minister, Dmitri Medvedev, said this week in an interview with the French newspaper Le Figaro that arms shipments are part of a longstanding contract with the Syrian military to repair equipment for “defense against an external aggression.”

“We must fulfill the obligations connected to our contracts,” Medvedev said, noting that Russia has faced a legal conflict after suspending some arms deliveries to Iran.

Syria has found it increasingly difficult to transport helicopters. In June, a ship carrying three Mi-25 helicopters from Russia to Syria was forced to turn back after the ship’s insurer withdrew coverage in response to sanctions. A month later, a second attempt to deliver the helicopters by sea was aborted.

The newly obtained flight documents show that Syria planned to use its Ilyushin IL-76 cargo plan to pick up helicopters at Ramenskoye Airport, also known as Zhukovsky Airport, near Moscow. The manifest describes the cargo as an “old helicopter after overhaulling [sic].” A second document, sent to the Syrian embassy in Baghdad, identifies the helicopters as Mi-25s.

Officials at Russian Helicopters, which makes the Mi-25, and Ilyushin, which makes the IL-76, said one Mi-25 with its blades removed would fit into an IL-76. Such helicopters have been shipped this way all over the world, they said.

Rick Francona, who was the U.S. air attaché in Damascus in the 1990s, said that using a cargo plane instead of a ship suggested the Assad regime was getting desperate.

“If they’re willing to use an IL-76 to bring one or two helicopters back, that tells me they need these right now,” he said. “Rather than getting it there in 10 days, it gets there in five hours. You can pull it out, reattach the blades and have in the air the next day.”

U.S. officials have expressed particular frustration with Russia over the Syrian conflict, which began in March 2011.

“I think we’ve been very clear, both publicly and privately, how we feel about any country, Russia included, supporting the Assad regime in any way,” State Department spokeswoman Victoria Nuland said Wednesday. “And it doesn’t simply go to the question of military support; it also goes for any kind of economic or political support.”

In June, Secretary of State Hillary Clinton said Russian aid with Syria’s attack helicopters would escalate the civil war “quite dramatically.” But a week later, a Pentagon spokesman declined to answer whether the Defense Department would try to stop future helicopter shipments.

The records obtained by ProPublica list the Russian 150 Aircraft Repair Plant as the charterer of the flights to pick up the helicopters. The documents show the firm was operating under a contract dated Nov. 27, 2005. The address listed for the charterer is in Kaliningrad, a Russian territory between Poland and Lithuania that contains large Russian military installations.

As with the currency shipments, the flight records show the Syrian cargo plane would take a circuitous route back from Moscow, flying over Azerbaijan and Iran before crossing Iraq.