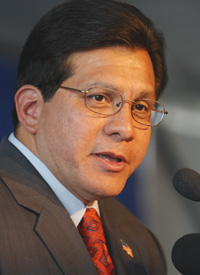 A report out today from the Justice Department's inspector general says Alberto Gonzales mishandled classified documents on a number of occasions during his tenure as attorney general, violating "basic Department regulations and procedures."

The violation was so severe that Inspector General Glenn Fine referred the matter to the Department's National Security Division for possible prosecution, but prosecutors there declined to pursue the matter, according to the report (PDF).

The 32-page report focuses mainly on Gonzales' handling of his notes of a March 10, 2004 meeting with congressional leaders regarding the NSA's surveillance program. Investigators found that Gonzales, after being sworn in as attorney general, had taken the notes from his White House office to his house, but didn't store them in a secure safe because he didn't know the combination. And when he returned to the Justice Department, he did not store them in the required special facility for top secret information.

The investigation apparently began after Gonzales could not immediately locate the notes upon a request from the White House Counsel's Office. It's a matter completely separate from the inspector general's sprawling, ongoing investigation into the firings of the U.S. attorneys and politicization of the department.

Gonzales' lawyers responded to the investigation with a memo admitting Gonzales' lapse, but saying it had been an accident. Gonzales was interviewed three times by investigators.

The report is hard on Gonzales, noting that he should have known certain documents were classified (the report says that Gonzales was unsure of the classification status of his notes). "Like all other Department employees," the report says, "Gonzales was responsible for safeguarding classified materials, familiarizing himself with the facilities available to him in the OAG for storing these materials, and observing the rules and procedures for the proper handling of classified documents."