Dec. 29: This story has been updated and clarified.

A version of this story is being published by the Albany Times-Union.

Environmentalists, state regulators and even energy companies agree that the problem most likely to slow natural gas drilling in the Marcellus Shale in New York is safely disposing of the billions of gallons of contaminated wastewater the industry will produce.

Between 1,500 and 2,500 wells per year could eventually be drilled into the huge natural gas reserve, state regulators say, although other estimates are far higher (PDF). Each well will produce about 1.2 million gallons of wastewater that can contain chemicals introduced during the drilling process and dredged up from deep within the earth. Using the state’s higher estimate, that means the industry will have to find a way to dispose of as much as 3 billion gallons a year, enough to fill 5,000 Olympic-sized swimming pools.

New York's Department of Environmental Conservation took a stab at addressing the wastewater problem in the draft environmental impact statement (EIS) on gas drilling it released in September. The report said the DEC won't issue drilling permits until companies prove they can dispose of the water. The report also listed three disposal options: Injecting it into underground storage wells, trucking it to specialized treatment plants in nearby states, or having it processed at sewage plants in New York.

But ProPublica has found that none of these methods are realistic.

When asked why the report included options that aren't feasible, DEC officials said they weren't recommending the facilities, but were merely offering an inventory of possible disposal methods. Ultimately it is the responsibility of the energy companies -- not the regulators -- to solve the wastewater problem, they said.

Raoul LeBlanc, a senior financial analyst for the energy consulting firm PFC Energy, said the "theme of regulation outrunning capacity" is likely to be repeated in the development of the Marcellus.

"This probably means delays to the ambitious programs for developing this resource and getting it to Northeast consumers," LeBlanc said. 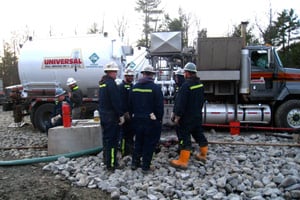 The bottleneck of treatment options has already inspired Range Resources, one of the biggest natural gas producers in the Northeast, to develop technology that allows it to reuse all the wastewater it removes from its Pennsylvania wells. Range leaves about 80 percent of its wastewater in its wells. The 20 percent that is recovered is blended with fresh water and used to drill new wells.

"Six months ago recycling was not even considered a realistic option, but there are certain things you don't know until you try," said Matt Pitzarella, a spokesman for Range, which is among the companies expected to apply for drilling permits in New York.

Range and other energy companies are also working with Radisav Vidic, an environmental engineering professor at the University of Pittsburgh who has a $1.06 million grant from the U.S. Department of Energy to find new wastewater recycling techniques. But Vidic says that reusing wastewater has its own limitations. It's working for Range, Vidic said, because most of the company's water stays underground and because its wells are spaced close together, so it's easy to truck the recovered wastewater from well to well.

DEC officials, government scientists and industry representatives all told ProPublica that until more sophisticated treatment solutions are developed, drilling in New York's portion of the Marcellus Shale will be off to a slow start.

"If no one is going to accept it, and the DEC follows the line in the EIS, then apparently drilling will be in hiatus until someone comes up with a way to treat it," said Bill Kappel, a hydrologist with the U.S. Geological Survey.

Wastewater Already a Problem in Pennsylvania

Wastewater disposal is especially critical in the Marcellus, because much of the gas there is buried a mile or more underground and the only way to get it out is through hydraulic fracturing, a process that uses large amounts of water mixed with chemicals to break layers of rock and release the gas. Instead of plunging vertically into the ground, as existing New York wells do, most Marcellus wells will be shifted horizontally once they reach the shale. This allows drillers to extract more gas from a broader area with fewer wells, but each horizontal well can create about a million gallons more wastewater than a vertical well.

When the water flows back out, it contains small amounts of the chemicals added to facilitate gas production, plus natural toxins dredged up from the earth, like benzene, which carries cancer risks. When the DEC tested 12 vertical wells in the Marcellus in 2008 and 2009, it found that the wastewater at 10 of them also contained a radioactive derivative of uranium at levels hundreds of times as high as the federal limit for people to drink safely.

Drilling wastewater also contains high levels of total dissolved solids, or TDS, which includes minerals that can make it five times as salty as seawater (PDF). TDS isn't considered particularly harmful to people (PDF), but it can damage freshwater streams and affect the color, taste and odor of drinking water.

In Western states drillers usually dispose of their wastewater in injection wells that are designed for long-term storage and are regulated by the U.S. Environmental Protection Agency. But the geography in the Northeast makes it difficult and costly to drill injection wells. There are only six such wells in New York, although Chesapeake Energy Corp. is filing an application (PDF) for another one. 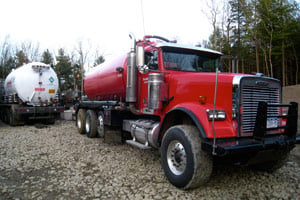 Instead, most drilling wastewater in the Northeast is processed through municipal and industrial treatment plants that aren't equipped to remove TDS, radium or any chemicals it contains. The water is then discharged into nearby streams and rivers.

High TDS levels have already caused problems for drinking water in Pennsylvania, where Marcellus Shale gas drilling accelerated in the spring of 2008. Much of Pennsylvania's wastewater was originally sent to municipal sewage treatment plants along the Monongahela River, a drinking water source for 250,000 people. TDS levels in the river were already high because of leakage from abandoned mines and other industrial waste, but after drilling wastewater was released into the river, TDS skyrocketed. Pennsylvania's Department of Environmental Protection is holding public hearings on new regulations (PDF) that would dramatically reduce the amount of TDS that can be discharged into waterways after Jan. 1, 2011.

New York’s municipal and industrial treatment plants are also unequipped to remove TDS, which is one reason so many plant operators say they don't want to take the wastewater. Their biggest fear is that TDS or some other contaminant in the wastewater might kill the freshwater organisms that they use in their treatment process, leaving untreated sewage flowing into rivers and streams where they release their water.

Many of the New York plant operators ProPublica interviewed have refused requests from drillers to take the wastewater and were annoyed that the DEC put them on the list of possible disposal options. DEC spokesman Yancey Roy said the DEC had contacted most of the operators it listed -- but most of the operators interviewed by ProPublica said they hadn't spoken with the DEC about taking drilling wastewater.

Brian Rayburn, who oversees the municipal sewage plant in the village of Bloomfield, said his facility has already reached its 323,000-gallon-a-day capacity just serving the needs of his community. Ken Bray, who operates the city of Amsterdam's plant, said the DEC recommended in 2004 that the plant not take on any new types of waste until repairs were made. Those repairs aren't finished, so Bray was surprised to find his plant on the list.

Katherine Nadeau, a water and natural resources associate for Environmental Advocates of New York, thinks the operators' concerns about drilling wastewater are well-founded.

Last year Nadeau studied the records of 32 New York sewage plants and found that many were discharging more pollutants (PDF) than they are allowed to under state and federal laws and that some hadn't received a full compliance review from the DEC in decades. She thinks the DEC staff is stretched too thin to make sure New York's drinking water is protected from drilling.

James Tierney, the DEC's assistant commissioner of water resources, raised the staffing issue in testimony (PDF) submitted to a New York State Senate committee in October, the day after the draft environmental review came out.

"Even before the current state and national fiscal crisis, the Division of Water faced significant cuts to both state and federal funding," said Tierney, whose department oversees the treatment plants that accept drilling wastewater. "In 1990, the Division had 339 staff; today, the Division has 267 staff, and at least twice the workload." 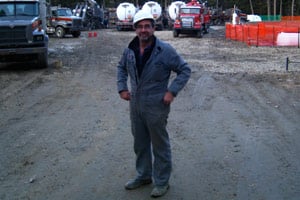 Although the recommendations in New York's environmental impact statement haven't been finalized yet, the DEC is already enforcing new wastewater disposal requirements, causing delays for some drillers.

Orville Cole spent more than a year searching for a plant that would take the wastewater from a well he was drilling in Otsego County for Gastem USA, a subsidiary of the Canadian-based natural gas company Gastem. The well is vertical, which means it will produce only about 35,000 gallons of wastewater, about 3 percent of the amount that will come from one of the horizontal wells planned for the Marcellus. Yet three different sewage treatment plants rejected Cole's water, because they feared that the chemicals the water contained could damage their plants or foul the waterways they discharge into.

Finally a municipal sewage treatment plant in Watertown, a three-hour drive from Cole's drilling site, agreed to take the wastewater. But still there were problems.

As the first five tanker loads of Cole's wastewater were being pumped into the Watertown plant in September, the plant's chief operator, Michael Sligar, noticed that it was turning dark and dirty.

Fearing that his plant might not be able to handle whatever was in the water, Sligar sent the last two tanker trucks back to Cole's drill site, where they sat for two weeks while Sligar analyzed the contents. The DEC and Sligar eventually decided that the plant could safely accept the water. But Sligar said that's no assurance that he'll be able to treat future deliveries from Cole's well, because the composition of a well's wastewater can change, depending on how long it has been underground.

If Sligar ends up rejecting the wastewater, Cole would turn to the backup plan the DEC now requires all drillers to have. In Cole's case that's an underground storage well in Ohio, a 10-hour drive from his well.

Sligar calls the Marcellus Shale wastewater a "hot potato" and says he's taking it only because he feels obligated to the state, which helps fund his plant.

"My peers don't warmly embrace this entire challenge," he said. "We would rather have this problem go away, but we don't have that option."