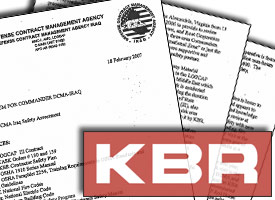 This morning, TheNew York Times revealed “internal Army documents” showing how faulty electrical work by contractor KBR at military bases in Iraq is far more extensive than previously reported and has led to the deaths of at least 13 Americans. Although the Times says it “obtained” the papers, which detailed 283 electrical fires over a six-month period, the Times did not publish the documents themselves.Thankfully, the House Oversight committee “obtained” the documents as well -- and they’ve just posted the files.

Among the committee’s documents is a 17-page memorandum that offers several interesting bits, including a KBR report stating that there have been even more fires at its facilities in Afghanistan than in Iraq. The committee also posted e-mailexchanges between military officials regarding a report on the fires.

One official wrote that he was “concerned” about the report and said a “lack of action” could result “in direct liability issues for our Agency.”His superior responded, “What report?”

It’s worth noting that the Times has been leading the coverage on this issue, with a series ofpieces detailing the shoddy electrical work.