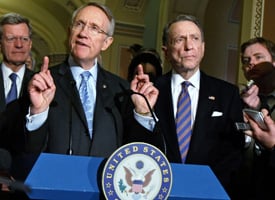 Congressional leaders announced a few hours ago that they had reached a $789 billion compromise between the House and Senate stimulus bills. But a public conference committee to lay out the deal was suddenly postponed. So what's in and what's out? It's hard to tell. So far, we only have general numbers of what's included: About $276 billion in tax cuts and $150 billion in infrastructure.

The Wall Street Journal is reporting that alternative minimum tax relief remains while tax breaks for home and car buyers have been scaled back. Funding to help states avoid layoffs and cutbacks has dropped to $44 billion -- from the original $79 billion, according to the Journal and the New York Times.

There are also conflicting reports about school construction funding. (As we've noted, the House stimulus bill had $14 billion for school construction, but the Senate cut all school construction money from its version.) Early today, Sen. Tom Harkin told reporters that $6 billion of those funds had been restored. But the Times is reporting that it's been cut in the final deal. Meanwhile, the Project on Government Oversight says the $1 billion for nuclear weapons program upgrades has gone kablooey.

In short: It's very much a moving target.

On another note, we're not sure how all this behind-the-scenes negotiating squares with Speaker Pelosi's promise, posted on her Web site, to have transparency in conference committee dealings. From Pelosi's site:

Require that all conference committee meetings be open to the public and that members of the conference committee have a public opportunity to vote on all amendments. Make copies of conference reports available to Members and post them publicly on the Internet 24 hours before consideration (unless waived by a supermajority vote). Disclose all earmarks.