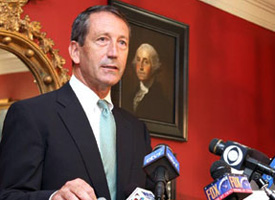 As we noted yesterday, the dilapidated South Carolina school that became a focal point of President Obama's emotional appeal on behalf of the stimulus won't get any less haggard -- its school district is getting just $900,000, which will be used for reducing cutbacks rather than fixing up buildings.

More bad news for South Carolina schools, according to the application Sanford submitted, is that the state is about to join an exclusive club of undesirable distinction: states that need a waiver to allow them to reduce public school funding in 2009 or 2010 to below 2006 levels. In order to obtain the fiscal stabilization funds, states have to ensure the federal government that they will continue to fund public schools and colleges at least at the level of funding from 2006. U.S. Education Secretary Arne Duncan has continually reminded state officials that the fiscal stabilization funds are to be used to avoid cuts, but also to drive reform.

According to ProPublica's review of the 38 applications submitted to the Education Department so far, only seven states and Puerto Rico have indicated that they intend to drop funding for schools or colleges in 2009 or 2010 to below 2006 levels. Only Florida -- and now South Carolina -- have declared intentions to do so for K-12 public schools. According to South Carolina's application, which has not yet been approved, the state plans to drop funding for elementary and secondary education in 2010 from 2006 levels by $24.7 million dollars, to about $2.5 billion.

Four other states (Massachusetts, Nevada, New Jersey and Rhode Island) and Puerto Rico plan to decrease funding for public colleges in 2009 or 2010 from 2006 levels, and several other states will toe the line. Colorado, Connecticut, Minnesota and Oregon will keep funding for schools or colleges in 2009 or 2010 exactly equal to funding from 2006, and Tennessee will toss an extra $34 at public colleges in 2010. And, as we reported last week, California corrected an accounting error on its application, which dropped the reported 2006 funding level by $2.3 billion. That will provide some wiggle room if the steep cuts Gov. Arnold Schwarzenegger proposed are implemented.

A Department of Education spokesman said he would let us know whether South Carolina will receive a waiver, so we'll let you know what they say.