In a two-week span last August, four workers died from falls on cell towers scattered across the country. Before the year ended, another worker had plummeted to his death, this time in Kansas.

Then, in early February, two workers were killed and two more were hospitalized when two cell towers collapsed in West Virginia.

Spurred by a drumbeat of deadly accidents, the U.S. Occupational Safety and Health Administration is changing how it investigates and assigns responsibility for injuries to tower climbers, the workers who build and maintain America’s cell phone networks.

Tower climbing, a small field of roughly 10,000 workers, has been called the most dangerous job in America. And as ProPublica and Frontline reported in 2012, cell phone carriers and tower owners have insulated themselves from legal and regulatory liability for on-the-job injuries by delegating this work to layers of subcontractors.

Now, for the first time, OSHA is systematically tracking which companies subcontractors were working for when accidents occurred, collecting paperwork that spells out such relationships. In a letter sent in February to industry employers and state wireless associations, the agency criticized “check the box” language written into contracts that doesn’t set out clear standards for safety.

OSHA’s chief administrator has insisted that carriers and tower owners must take more responsibility for safety.

“It’s really incumbent on them that safety provisions are absolutely implemented,” OSHA director David Michaels said in an interview. “Safety can’t just be pawned off on the final contractor.”

There have been 19 climber deaths in communications tower accidents since the start of 2013, a fatality rate Michaels called “clearly unacceptable” in a videotaped address to a tower industry conference in February.

The latest came just last week, when two workers died while dismantling a Union Pacific telecommunications tower, according to a company spokesman. The week before, Chad Weller, 21, died after falling 180 feet from a Sprint cell site atop a water tower in Pasadena, Md., according to a local fire official.

OSHA’s recent moves supplement those made last November, when the agency instructed employees to inspect any active tower worksites they see. This was meant to address another chronic hurdle to safety enforcement: Tower sites are harder for OSHA to check randomly than factories or other construction sites because work often occurs in short bursts, rather than over weeks or months.

The rise in fatalities that began in 2013 reflected, in part, the breakneck pace of work to upgrade and expand cell networks.

“I can’t tell you a year I remember that was as busy as 2013,” said Victor Guerrero, a telecom consultant who has been in the industry since 1998.

In particular, Sprint was in the midst of Network Vision, a multibillion-dollar project to unify its network architecture and expand its 4G LTE footprint that Chief Executive Dan Hesse characterized as a “complete rip and replace of the entire network.”

Four workers suffered fatal accidents on Sprint’s cell sites in 2013. One, Michael Frontiero Cortes, 41, fell nearly 200 feet to his death while performing maintenance on a satellite dish on a Maryland cell tower in July, according to OSHA. He’d started climbing earlier that year to support his four children, his mother said.

Veteran climber John Dailey loved the expansive views offered by tall towers and that his work helped people keep in touch with one another. The 49 year old slipped and fell during an August installation on a Sprint cell site beside a North Carolina highway.

Dailey’s sister, Tabetha DuPriest, has started a letter-writing campaign with the nonprofit Hubble Foundation to get the attention of cell carriers.

In a statement, Sprint said that the safety of everyone who works on its network is a top priority and that the cell carrier requires contractors to have one person at every job site who is responsible for making sure safety programs are being followed.

Overall, 13 climbers died working on communication towers in 2013, more than had died in the previous two years combined, OSHA data shows. All but two of the accidents were on cell or cell-related sites.

Workers have also suffered serious, but not fatal, harm in additional accidents.

A 50-foot fall from an AT&T cell site last June left novice climber Thomas Jeglum, 24, in a coma for months, according to his wife, Gina. In a statement, an AT&T spokesperson said the cell carrier requires tower contractors to comply with all safety laws and to fully train anyone working on AT&T projects. 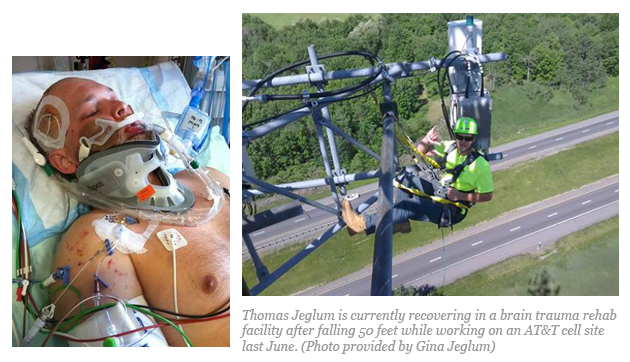 So far, little is officially known about what caused many of the recent accidents because OSHA’s investigations are ongoing.

When ProPublica and Frontline examined 50 deaths on cell sites between 2003 and 2011, we found that workers were often poorly trained, improperly equipped or working under intense deadlines. To save time, they sometimes work without attaching their safety gear to the tower, leading to falls.

OSHA sometimes sanctioned subcontractors for safety violations connected to these cases, but never penalized cell carriers. The agency had not known that more climbers died on AT&T projects during this nine-year period than had died on projects for Verizon, Sprint and T-Mobile combined.

Under Michaels’ leadership, the agency is taking steps to eliminate this gap in oversight.

“I think it’s profound that he wants to look at all entities from subcontractors to carriers and tower owners,”said Rob Medlock, who had specialized in tower safety during his 33 years at OSHA before retiring in 2010. “That’s been difficult for OSHA in the past.”

The recent uptick in accidents also has prompted some in the industry to rethink their approach to safety.

Sprint has announced it will work with PICS Auditing to check prospective contractors’ safety manuals, accident rates and training programs before hiring them to work on its next large-scale cell network project. PICS Auditing has done similar work for clients in the oil and gas, mining and construction industries.

PICS Auditing Chief Marketing Officer Jeffrey Muto said the company has also spoken with other carriers and tower management companies about reducing the risks of accidents on their cell sites.

Sprint said in a statement that it views the partnership as a proactive effort that the wireless industry should take.

OSHA’s David Michaels believes if the public knew about the dangers workers face making our cell phones work, it could spur change.

“If they were aware,” he said, “they may insist companies that provide them with that service make sure workers are safe.”

Kara Brandeisky contributed to this report.