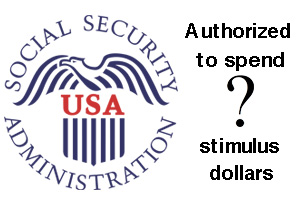 This week, we launched our Stimulus Progress Bar, which tracks how much stimulus money each federal agency has spent. We measured each agency's spending as a percentage of its total stimulus funding — information that was harder to discover than you might imagine. How hard was it? you might ask. Let us offer this anecdote about just one federal agency: the Social Security Administration.

On July 9, we called the SSA's press office to ask what seemed like a simple question: How much money did Congress authorize the SSA to spend under the Recovery Act? An SSA spokeswoman, Dorothy Clark, said that in order to find out, we would need to file a request under the Freedom of Information Act. We filed that request. Twenty-seven days later, we got a call from the SSA's Office of Privacy and Disclosure, which handles FOIA requests. The office said that Clark was mistaken and the information we were looking for was publicly available after all, on Recovery.gov. The number? $13.079 billion.

The next morning, we spoke again with Clark, who said that the number on Recovery.gov wasn't actually what we were looking for. She explained that it did not include administration costs, which add another $90 million. So was the real number $13.079 billion plus $90 million? Clark promised to send that request to another office inside the agency and get back to us the next week.

This may seem like budget arcana, but if a federal agency can't come up with an accurate answer to how much stimulus money Congress authorized that very agency to spend, it's hard to see how the administration as a whole hopes to make the stimulus package transparent and accountable. That's why ProPublica created the Stimulus Progress Bar to track spending. (For the record, we used the $15.227 billion figure for the SSA.)

We’ll update our numbers every week, and we hope you'll check back regularly to see how quickly individual agencies, and the government as a whole, is spending your money.