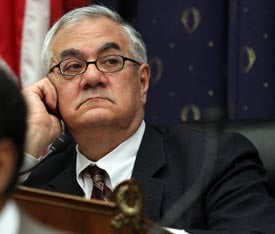 Early in November, we wrote that HUD’s "Hope for Homeowners" program was struggling to dole out the hope. In its first two weeks, only 42 people applied to the program meant to help as many as 400,000 avoid foreclosure. Two weeks later, the government made some fixes, but we couldn’t figure out how they’ve been working out. Until today.

HUD Secretary Steve Preston told today’s Washington Post that the program is a flop: Only 312 people have applied because it’s "too expensive and onerous for lenders and borrowers alike."

He also set off a rapid chain reaction of blame-dodging. Preston places the blame squarely on the shoulders of Congress: "Congress dotted the i's and crossed the t's for us, and unfortunately it has made this program tough to use," he said.

But according to Rep. Barney Frank (D-MA), who helped secure congressional approval for the program, the administration "kept putting pressure on us to make it cheaper and more restrictive…If it hadn't been for the Bush administration's opposition, we would have written it in a better way in the first place." He also called the leadership of the Federal Housing Administration, which runs the program, a "disappointment."

The Post compares HUD’s foundering program to more successful ones elsewhere in the government. For instance, the FDIC’s program to help customers of failed IndyMac Bank has modified more than 3,500 mortgages in two months.

It looks like the hope-monger-elect may have to step in to help homeowners. The Wall Street Journal reports that President-elect Obama is already tossing around potential mortgage-modification plans.