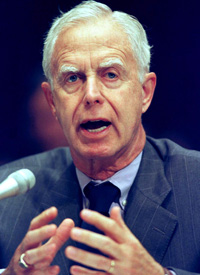 As the world financial system implodes, Democrats have blamed the Bush administration's lack of regulation for creating the conditions for collapse. But a top Clinton regulator acknowledges that he and his colleagues a decade ago "beat back" regulatory efforts that could have prevented credit markets from becoming so precariously balanced they were âmillisecondsâ from disaster.

âThat was a point in history when perhaps we should have anticipated something like where we are today, at least the possibility,â says Arthur Levitt, chairman of the Securities and Exchange Commission from 1993 to 2001.

In 1998, an obscure federal agency, the Commodity Futures Trading Commission, raised the prospect of regulating the burgeoning market in complex financial instruments, which then had a notional value of $28.7 trillion. Today the notional value is $531.2 trillion, according to the International Swaps and Derivatives Association.

The nationâs leading financial officials – Levitt, Federal Reserve Chairman Alan Greenspan, Secretary of the Treasury Robert Rubin, and his deputy Lawrence Summers – pummeled the proposal, saying it was dangerous to even discuss the idea.  Led by Rubin, Levitt and Greenspan, the Clinton White House instead proposed a modest set of reforms. Months later, Clinton Administration officials walked away from their own recommendations, concluding the market could be best managed by the financial industry.

Neither Rubin, Summers, nor Greenspan would comment for this story. Rubin and Summers are serving as economic advisers to Democratic presidential nominee Barack Obama, who has repeatedly blamed the financial crisis on regulatory failures of the Bush Administration.

Levitt, the longest serving head of the SEC, said Democrats and Republicans should be held responsible. Asked about Democratic House Speaker Nancy Pelosiâs observation that the financial collapse can be blamed on the âanything goesââ policies of the Bush Administration,  Levitt said,  âNo, I think it goes back before that. This was decided under Clinton as well.ââ

Clinton Administration officials defended their handling of the issue, saying the commodity commissionâs calls for discussion posed a very real threat to a thriving market. Several former officials said it was politically unpalatable to rein in what was widely seen as an engine of unprecedented prosperity.

The issue arose from the private trading of what are known as derivatives, financial instruments which allow investors to bet on the change in value of anything from interest rates to commodity prices.  Catastrophic collapses in some of these markets are at the center of the ongoing global financial meltdown.

Derivatives have been around for decades and offer enormous benefit in expanding access to credit, allowing companies to borrow huge sums and protect against risk.  Their dangers, however, were no secret: complexity, a lack of public information about volumes and prices, and heavy reliance on debt to boost returns. Even modest moves in the value of assets underlying derivatives can trigger huge swings in value. In 1994, Orange County, Calif., announced that it had lost $1.6 billion in derivative trading, forcing it to declare bankruptcy.

Orange Countyâs well-publicized struggles did not put a dent in the market. During the next four years, derivative trades grew by 154 percent.  Unlike stocks, which are mainly traded on public exchanges, only a portion of the derivatives markets are in instruments listed on exchanges. Large volumes are traded in the form of specially crafted âover-the-counterâ instruments whose size, shape and risks typically havenât been disclosed to regulators or others in the market.

Staffers at the Commodity Futures Trading Commission, whose original purpose was to regulate agricultural trade, had watched with alarm the growth in derivative trading, some of which involved agricultural commodities.

Led by Chairwoman Brooksley Born, the commodity commission began working on a document that raised the idea of possibly regulating derivatives. The document was framed as a beginning point to discuss what a rule might look like.

âThe market had grown and there had been a number of problems,â said Michael Greenberger, then the director of the commissionâs division of Trading and Markets.

In the spring of 1998, the commission circulated a draft of the document before publishing it in the Federal Register. Born sent it to regulators, legislators, and members of the financial industry. Reaction was swift and overwhelmingly negative.

"I was in Brooksley Bornâs office when Larry Summers called and said, 'I've got 13 people in my office'," said Greenberger, to whom Born relayed the conversation. Summers told Born that the 13 were industry lobbyists, "and their view is that if you do this, just issue this release, it will cause the worst financial havoc since the end of World War II.â

Both Born and Summers declined to comment on the conference call.

Summers and others at Treasury feared that if the commission claimed jurisdiction over derivatives it would call into question the legality of trillions of dollars of existing trades, creating global chaos in the credit markets. Opponents argued the Commission could only regulate âfutures,â which by law, are traded on the futures exchange. Since many derivatives had not been traded on the exchange, they might be considered illegal.

âThere was a legitimate and widely held view that this aggravated that very question of legal certainty,â said Gary Gensler, assistant secretary of the Treasury at the time. âAll it took was one judge in some jurisdiction to determine this and it would throw a great deal of uncertainty into this interconnected world.â

Itâs a contention that former Commission staffer Greenberger rejects. âRetroactively there would have been no uncertainty, everything would have stayed the way it was, but prospectively we would have regulated them,â he says.

Despite what opponents said, the commissionâs proposal emphasized that any new rules would only apply to derivative contracts going forward. The 13-page proposal posed 75 questions about how the derivatives market had changed, and what sorts of new rules, if any, should be introduced. It also tentatively floated the idea of a new exchange specifically for some sorts of derivatives, and asked industry and regulators whether that would benefit American traders.

The markets did not fall into crisis as a result. Yet opposition mounted. The day after publication in the Register, Greenspan, Rubin and Levitt issued a news release âseriously question[ing] the scope of the CFTCâs jurisdiction,â and calling for Congress to take the matter out of Born and the Commissionâs hands.

âShe was just pelleted for it because they got all up in arms that we were going to regulate swaps,â said John E. Tull Jr., a CFTC commissioner at the time. Tull, a rice farmer from Arkansas, recalls an intense lobbying effort, mounted by the biggest investment banks and their industry representatives.

Records show that in the following two months, lobbyists met with commissioners at least 13 times. In addition to the fears of legal uncertainty, industry officials also argued that investment banks involved in these trades were so sophisticated that they alone should regulate them. The National Futures Association urged self-regulation, commenting that, âThe sophistication of the participants in the OTC derivatives markets must be a primary factor in determining the appropriate level of regulation.â âI remember the fierceness with which they opposed the issue,â Levitt said. âThey were really very, very determined to beat back this effort.â

The debate was fierce.  At a Congressional hearing in late July 1998, Greenspan likened Bornâs actions to trying to punch the capital markets in the nose.

As administration officials debated whether to regulate these financial instruments, the hedge fund Long-Term Capital Management, which relied on mathematical models to govern a tangled web of derivatives trades, collapsed. The New York Fed engineered a bailout, supported by 14 private banks who invested $3.6 billion.

Many at the commission saw the failure of the hedge fund as vindication of Bornâs concerns. âLong-Term Capital Management kind of proved Brooksley Born right,â said Tull.

In response to the Long-Term Capital debacle, Levitt, Greenspan, Rubin and Born released a report in April 1999 as the Presidentâs Working Group on Financial Markets (pdf). It recommended that publicly traded companies involved with hedge funds or others that borrowed large sums of money would have to disclose their level of risk.

The report contained a warning that now seems prescient: "Market history indicates that even painful lessons recede from memory with time. Some of the risks of excessive leverage and risk taking can threaten the market as a whole, and even market participants not directly involved in imprudently extending credit can be affected."

It ended with a vow that if moderate regulation and self-monitoring failed, federal officials would contemplate âdirect regulation of derivatives dealers.â

The report was quickly forgotten.

âLong-Term Capital was looked at as such an aberration,â recalled Levitt, that the Working Group did not see the need for systemic change. He also said that strong personalities like Sen. Phil Gramm (R-Texas) the banking committee chairman, opposed the change.

âPhil Gramm in particular, with Alan Greenspan, were patron saints of the derivatives business,â says Levitt. âThey clearly wanted that business to be unregulated.â

During the production of the April 1999 report, Brooksley Born retired, and with her exit, impetus for regulation disappeared. Larry Summers replaced Bob Rubin as Treasury Secretary soon after. Six months later, a new Presidentâs Working Group report (pdf) suggested that, far from regulating derivatives, Congress should expressly exempt them from oversight. Later that month, the commission quietly withdrew its proposal.

In late 2000, Gramm, currently one of the top economic advisers for Republican presidential nominee Sen. John McCain, sponsored an amendment that, among other things, prohibited the commission from regulating derivatives.

Former CFTC Commissioner Tull believes an opportunity to alter the course that led to the current malaise was lost. Had the proposal gone forward âit would have dramatically changed the situation we find ourselves in now,â he said.

Levitt wishes the Clinton team had acted before derivatives got out of control.

âThe market was too large, too explosive in its growth to merely allow pure market forces to suffice as self-regulatory mechanisms,â he said. âI have some regrets about it, clearly.â