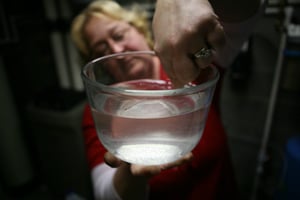 Since we launched, we've been reporting on the environmental threats of drilling in natural gas reserves around the country. (Here’s a good primer on the process of hydraulic fracking that is used to release the gas.) The potential risks of hydro-facking have been gaining attention, and we wanted to point to two on-the-ground stories that have recently come out.

This month's Vanity Fair has a long piece, "A Colossal Fracking Mess," on the human and environmental effects of the drilling. It follows Dimock, a town in northeastern Pennsylvania, where residents are fighting the hydraulic fracking that they say has contaminated the town's aquifer. The story reports that the water supply is so harmful that the town is "now known as the place where, over the past two years, people's water started turning brown and making them sick, one woman's water well spontaneously combusted, and horses and pets mysteriously began to lose their hair." We reported on Dimockmultipletimeslastyear. Our lead reporter on gas drilling, Abrahm Lustgarten, wrote that Dimock was "ground zero for drilling the Marcellus Shale, a prized deposit of natural gas that is increasingly touted as one of the country's most abundant and cleanest alternatives to oil."

Also, last night HBO premiered the film Gasland, a feature-length documentary that looks at how communities across the country have been affected by fracking. Filmmaker Josh Fox started his reporting when he was asked to lease his own land for drilling. In a much discussed scene, the film shows sink water with such high levels of methane, it ignites on fire from the small flame of a cigarette lighter.

Here's a trailer of the film: