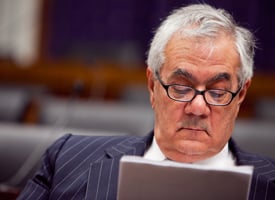 District attorneys' offices cashing in from deals with a private company that collects bad checks may soon have to answer to Rep. Barney Frank, D-Mass., chairman of the House Financial Services Committee.

"It appears to be that the DAs in some of these cases have not exercised proper control," Frank said in an interview with Times reporter Stuart Pfeifer. "Some members of my staff are looking into it. We do have some things on the agenda."

The Times followed up on our March investigation that showed how CorrectiveSolutions, acting under contract with prosecutors, threatens prosecution and prison time if consumers do not make good on bounced checks -- even when there is virtually no chance they will be charged with a crime.

Under official DA letterhead, the check writers are told to enroll in "financial accountability" classes. CorrectiveSolutions charges fees up to several hundred dollars and kicks back a portion to the DAs. Los Angeles County earned more than $1 million in four years, budget documents show.

The program won legal cover in 2006, when prosecutors and lobbyists persuaded Frank to offer critical support for an amendment exempting it from the Fair Debt Collection Practices Act. Frank said he went along after being told the program was a path for participants to avoid a criminal charge.

Frank's latest comment to the Times is the first indication his office is investigating. Back in March, Frank said he backed the amendment at the request of the National District Attorneys Association. But he was surprised to learn that in some cases, prosecution isn't a real threat.

"I would assume the prosecutor wouldn't send (a repayment letter) to them if they didn't intend to take any action at all," he said then.

We have a query in to Frank's office to find out more and will let you know when we hear back.