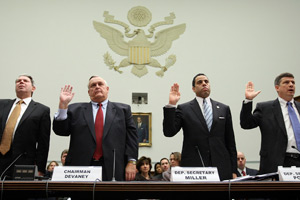 Yesterday's GAO report (PDF), looking at errors and inaccuracies in the first round of reports provided by recipients of stimulus money, is covered from a variety of angles. Reuters' Lisa Lambert looks at the audit itself, while and the New York Times' Michael Cooper notes the accompanying Congressional testimony of Earl Devaney, the chairman of the Recovery Accountability and Transparency Board, that the actual job numbers could be higher or lower than claimed. Meanwhile, ABC's Rick Klein reports in The Note that Republicans are using the discrepancies in stimulus reporting to bolster their argument that the government shouldn't be allowed to play a greater role in health care.

ProPublica's Jennifer LaFleur and Michael Grabell have noted that the data errors at Recovery.gov should be kept in perspective.

Jared Bernstein, the chief economic adviser to Vice President Joe Biden, told an audience at the Brookings Institution that the administration was open to more stimulus, the Washington Post's Alec MacGillis reports. "Bernstein emphasized that he was not expressing any official administration preferences about how to proceed," MacGillis writes. "But his comments showed far more openness to more direct approaches to hiring or retaining workers than he signaled just three weeks ago in a speech at American University, where he dismissed a question about direct government job creation by arguing that public works programs take longer to get going than people realize.”

Finally today, the Boston Globe's Green Blog reports that the University of New Hampshire is getting $700,000 in stimulus money to test "the nation's first floating deepwater wind turbine." The Globe reports that the beauty of the project is the possibility of moving offshore wind farms far enough away from coastlines that they don't sully the view, thus reducing public opposition.