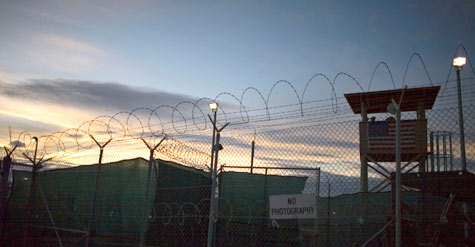 More than a year after the Supreme Court ruled that Guantanamo detainees can appeal their detention in U.S. courts, at least 17 prisoners remain in U.S. custody despite judges’ orders for their release. To help track the progress of those cases, ProPublica launched a feature tracking each detainee’s petition. Today we updated that feature, after a number of recent developments.

Last week, the government released two detainees. The first was a 34-year-old man named Khalid Al Mutairi, whom a judge ordered released in July after finding the government couldn’t support its claim that he was part of Al Qaeda. Al Mutairi was transferred to Kuwait, his home country.

The government released another man to Belgium, but refused to identify him or his nationality, citing a request from Belgian authorities that he be given the chance to start a new life there. The Department of Justice did not respond to calls asking whether the second detainee was among those ordered released by a U.S. judge.

Meanwhile, lawyers for another detainee, Fouad Al Rabiah, who was ordered released Sept. 17, have tried to increase the pressure on the government. A judge found the evidence against Al Rabiah “surprisingly bare,” and ordered the government to facilitate his release “forthwith.” (Read more about the judge’s highly critical ruling.) But rather than wait for the government to decide whether to appeal, Al Rabiah’s lawyers filed a motion on Tuesday calling on the court to hold Defense Secretary Robert Gates in contempt of the judge’s order.

Al Rabiah’s lawyers contend that the government is dragging its feet, arguing it has “refused to take any steps to facilitate Al Rabiah’s release on the legally frivolous ground that they are considering whether to appeal the release order.”

Robert Chesney, a law professor at the University of Texas and an expert in national security law, said the decision to name Gates personally was “good spin” and could spur the government to action, but the contempt motion itself “is not likely to succeed.”

David Cynamon, one of Al Rabiah’s attorneys, disputed the suggestion that the motion is a public relations move, saying he “fully expects” to win the motion, unless the government releases Al Rabiah first.