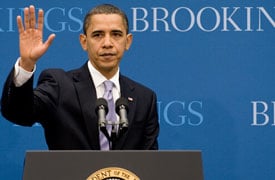 Most news today revolves around President Barack Obama’s stimulus speech on Tuesday and the announcement of a new jobs bill (or a second stimulus, stimulus 2.0, or 3.0, depending on who you read). In what Washington Post columnist Harold Meyerson calls Obama’s “FDR Moment,” the president offered up a series of tax breaks, the redirection of leftover TARP funds, and the doubling-down of federal investment in infrastructure. Meyerson writes that the Obama administration has come to the same understanding that FDR did – that propping up banks isn’t enough to fix the economy, as long as the banks look out at the economy and see nothing but risk. All that does is leave the government as the de facto banker once the private sector has abandoned small businesses, even though those same banks have received massive public assistance.

The New York Times offers up slightly contradictory headlines, with “Obama Offers Help for Small Businesses” and “Little New for Small Business in Obama Job Speech.” But the crux of what the reports say is this: A series of proposals that Obama outlined in his speech are meant to help small businesses, but they’re essentially an extension of the proposals that existed in the first stimulus bill. An anonymous White House staffer acknowledged this to the Times, saying: “The president is very satisfied with the Recovery Act. So part of this effort is to take and build on the successful parts of the Recovery Act, and put more money into them, or extend them for another year.”

And finally, Republican Sens. John McCain of Arizona and Tom Coburn of Oklahoma released a report Tuesday that takes a closer look at 100 stimulus-funded projects, with the aim of showing that “billions of dollars of stimulus funding have been wasted, mismanaged or directed towards silly and shortsighted projects.” Politico reports that the senators put the blame on Vice President Joe Biden, who once likened himself to a “sheriff” overseeing the stimulus.