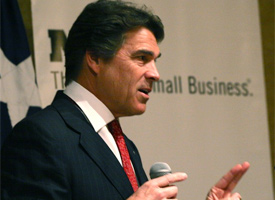 Some Republican governors may be holding their noses as they swallow billions of stimulus dollars coming to their states.

Texas Gov. Rick Perry told a crowd of small business owners Wednesday that he wished he could say "No thanks" to some of the $37 billion, which the liberal Center for American Progress says could be headed for the Lone Star State.

"I might as well quit grousing about it, because it's reality now," Perry said, according to the Associated Press.

Over in South Carolina, Gov. Mark Sanford has been trying to bail out of the bailout. But he seemed to give in Thursday morning on the CBS Early Show.

"Being against it doesn’t preclude taking the money," he said.

Meanwhile in Idaho, Gov. Butch Otter issued an executive order for the state to review the stimulus plan for a month before distributing any funds.

Joining the pack of antistimulants are governors Haley Barbour of Mississippi, Bobby Jindal of Louisiana and Sarah Palin of Alaska.

The thrust of the criticism is whether long-term deficits and future funding expectations the plan could create outweigh the immediate boost to local economies.

It's unclear if the governors will -- or even can -- refuse the money. The political pressure they'd face would be seismic. South Carolina has 9.5 percent unemployment, and the stimulus plan contains money to help Louisana and Mississippi recover from recent hurricanes.

Governors don't have much control over things like federal tax cuts; so even if they did refuse, middle-class residents would still get the $400 rebates. But the law is filled with use-it-or-lose-it provisions, so it's possible that governors could boycott some of the transportation and education funding.